Getting Away: The Pleasures of East Gippsland Part One


WE are in a little place called Sarsfield, near Bairnsdale. We arrived last night with just a few hours of daylight left. It is a family farm with an adjacent wooden cottage. The owner’s son, a fifteen year old boy called Ashley, immediately gave us a tour of the property. He did it with a certain relish. He loves living here. I told him we are city people, naïve and curious. Simply adorned with t-shirt and shorts, he was full of chatter and friendliness and charm. We visited the large sow who wandered over from behind her fence repaying our curiosity with curiosity of her own. Her body was warm and her back felt like the straw you find from the bottom of an outdoor broom. 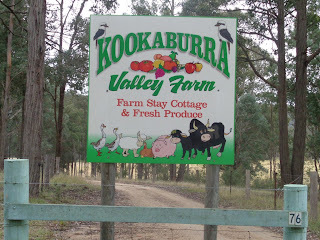 Then we saw the myriad ducks and geese soldiering around, seemingly at random. Not quite as friendly, they kept a few paces ahead of us, expectant of food. Ashley collected white buckets filled with pellets. His slightly older sister, Tiffany, joined us in her tracksuit. She had food for the ducks. The four of us were to feed the pigs. Their large pen was mud-filled. We approached them excitedly and what a raucous sound they provided! The air became filled with heavy grunts and high pitched squeals. I thought of the young porkers in ‘Animal Farm.’ Some of the pigs climbed on other pigs’ backs. We splashed the food randomly on the soft surface of the muddy floor and patted their backs while they ate. 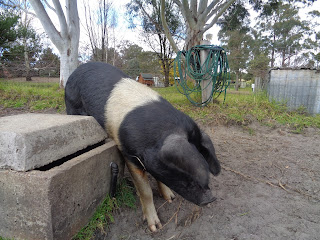 When Ashley finished his farm stories and the animals were satisfied we wandered back to our cottage to prepare dinner. By now, in the twilight, a heavy mist had descended spookily all about us, sitting on the surface of the land. These are all new experiences. Stars began appearing. I swear the sky towards the horizon was a distinct mauve or lilac colour. 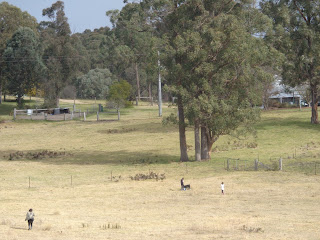 Posted by darren harrison at 5:53 PM