More Animals and a National Park: The Pleasures of East Gippsland Part 3 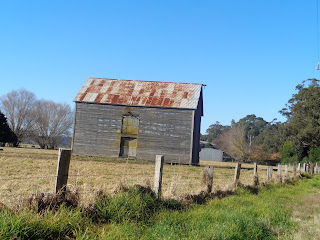 
WOKE up. Fell out of bed. The terrain out of Bairnsdale on the Dargo Road was a different road experience to yesterday. There were more sheep instead of cattle. We stopped sometimes to marvel at baby lambs dragging on their mother's teats. We also stopped to morbidly assess last night’s carnage- wombat and kangaroo on the side of the road. The fields, too, had changed, farming-wise. Instead of dairy farming, winter crops instead, and fields of what looked like wheat. Are wheat crops compatible in winter?


We found ourselves in Glenaladale at a horse riding camp called ‘Coonawarra.’ We were too late for a planned two hour ride. Instead the instructor rode off with experienced riders who were on time, and we were left to parade the girls around ourselves on a dirt track in circles a bit like a rugged version of the mounting yard at Flemington racecourse. Lolly was a passive agreeable horse who was more than happy to make about a hundred strolls in wide circles, one lightly built child at a time.


About twenty minutes away was the Mitchell River National Park, situated right on the Mitchell River. A skinny track led us to The Bluff- a lovely lookout over the glistening river and rugged granite cliffs. The gravel path undulated gently and in our minds took us far away. I sang ‘And The Tide Rushes In’ at the top of my voice.


Photos of landmarks that reminded us of yesteryear on the way back. Old service stations now closed and derelict; ancient farm buildings with an old wooden wagon. Then suddenly we were driving along the busy Bairnsdale Streets. Antique shops, the expansive Salvation Army store. The impressive St Mary’s Catholic Church. Simply just crossing the road alone threw me back to wandering the quiet country streets of Wangaratta when I first left home. I knew nobody and was initially quite lonely. Still, the memory gave me a romantic association and somehow I felt free, a feeling naturally that I don’t associate with streets like Sydney Road back home. 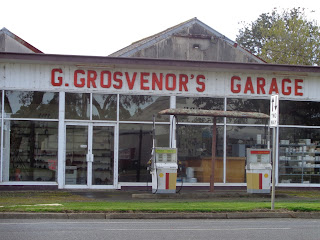 The exterior of the Grand Terminus Hotel behind Main Street has probably changed since the days after it was first built in 1885. The lovely nostalgic photos inside suggest this but there is a strong resemblance just the same. As we began driving home after dinner, we saw other charming old buildings to explore for another day- the courthouse and the library for example. After this, thick night fell very quickly. 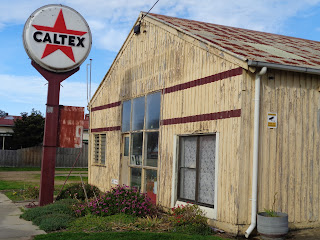 Posted by darren harrison at 6:45 AM