Motoring Around: The Pleasures of East Gippsland Part 2 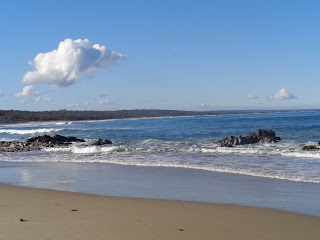 
THIS morning we slept a bit too long on uncomfortable bedding. It was the first night of the newest Ashes cricket series, from Cardiff. A restless night. Eventually we got dressed and went for a renewed tour of the farm, visiting the animals that provided our entertainment last night. S and I were looking at the ducks and geese. Tiffany shouted out from the house ‘you can let them out!’  I did. Then S had a horrible feeling we had misheard and wondered how we could get them back behind the wire again. ‘But it’s ok’, I said hopefully. ‘Foxes only appear at night.’


We left Sarsfield mid-morning en route to Lakes Entrance. Last time we ventured here a few years ago, disaster struck. Our house became flooded in our absence because of the behaviour of an errant rat. This time, we cross our fingers.


The road to Marlo and Cape Conran is pretty. The fields on either side of the road are marshy and green. There are a number of farms dotted around, and by the look of it, they are mostly dairy farms. We stop at one point and humans and cows lovingly gaze at one another across a small ditch. The crossword keeps us busy. We are briefly stumped on a word starting with ‘O’ in reference to ‘threatening.’ It is the final word, and when we think of ‘ominously’, we have completed it.


The eastern beach at Cape Conran is rugged and pretty at the same time. A looks everywhere for shells which is par for the course, and S indulges in her new found love, handstands. I find any number of weird formations out of sea weed and sea and beach debris, and large sticks which I hurl into the water. The tide is coming in so we have to head back, but not before we explore the slate-grey jagged rocks at the beach’s edge. I imagine I am Ingmar B and I am on Faro.


We drive, calm and contented, toward Marlo. There is something about the name of the town. But we don’t really see much of it- just the pub which overlooks a pretty estuary. The girls memorably have their first ever taste of alcohol- a minuscule drop of red wine. 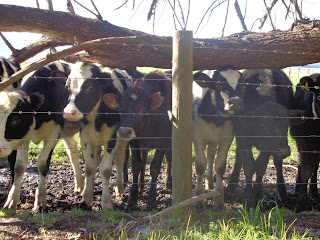 Wending our way back homeward, it is starting to darken. A comments from the back of the car that she likes the orange sunset strip in the sky. We stop, looking for adventure, at one of those dairy farms we passed much earlier. The friendly farm woman is milking her cows, by machine. Some metal implement squeezes their teats, as they chew on cow feed passively. There is much bemusement about the cascading of cow waste. It’s a good country education for all of us. The cows rotate on their metallic roundabout contraption, then peel off.


The final stop is the supermarket in Orbost. The night sky envelops us all around. We are home at the cottage, satisfied. The cricket is back on.

Posted by darren harrison at 3:31 AM