Dekalog 8: the shadow of war-time Warsaw


Not surprisingly, in a large group of films set in Warsaw, there is a film, Dekalog 8, that is centred squarely upon events from the war and different experiences and attitudes towards it. It is the quietest of the films, the most contemplative, and the most introspective. There are, essentially, only two main characters.


Elzbieta now lives in America, but is re-visiting Warsaw to ask an elderly ethics professor, Zofia, questions pertaining to her childhood, in regards to when she was a little girl, in February, 1943. She listens to stories about ethics in the professor’s lecture hall. The first dilemma posed by one of the students is the situation faced by the doctor in Dekalog 2. In a nice touch, after hearing the story, the professor says “I know how this story ends…Warsaw is a small city.” It makes it seem that the little, largely disconnected community portrayed in Dekalog is real. 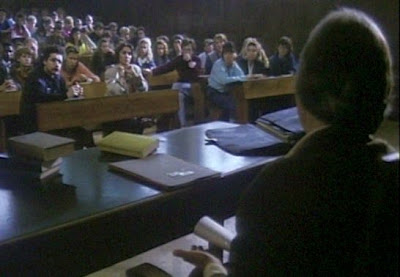 The second moral dilemma is posed by Elzbieta. It will be, of course, circumstances involving herself as a little girl, and somehow Zofia will be involved. As a little six year old girl, it seems, Elzbieta was hiding in a cellar outside the Warsaw ghetto with Catholic occupants and was forced to seek a new hideout with her custodian. She was taken to the home of the would-be foster parents on the proviso she had been christened, but at the last minute, the Catholic couple changed their mind, saying that, as good Catholics, they could not commit the sin of lying. In this instance, the child was turned away to face an almost certain death. Elzbieta was placed in grave danger many years ago for reasons she still cannot fathom. It becomes readily apparent, watching the effect of the story upon Zofia, that Zofia was in the party that rejected Elzbieta. Elzbieta is therefore forcing her to examine her conscience, and at the same time seek answers. It is to Zofia’s immense relief that the former little girl is still alive.


For the rest of their evening together, and the next day (Zofia insists Elzbieta stays the night with her), Zofia will cling to her, desperate to feel loving and supportive of the woman who was once a child that she let down. When Elzbieta explores the buildings in which the events of 1943 took place, we can see it is still an eerie place at night, with lots of shadows and poor lighting, and people living precarious lives. She leaves Zofia by the car for quite some time, and Zofia feels compelled to try and locate her, beginning to feel terrified that she may lose Elzbieta in these surrounds for a second time. 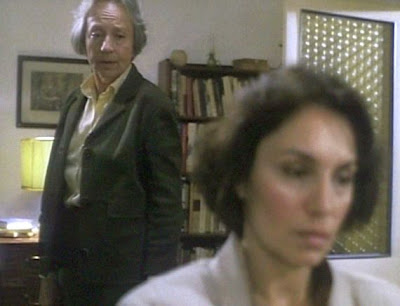 Later, in Zofia’s flat, Zofia kneads Elzbieta shoulders and apologizes. She admits she sent her to a seemingly certain death. She tells Elzbieta “…nothing is more important than the life of a child.” In other words, her position has altered. She has become less morally rigid in her thinking, and thankfully for the both of them it is not too late. She is shaking as she says it. She is full of sad regrets, and her decision has haunted her whole life. At these times Kieslowski films Zofia in Bergmanesque close-up. It accentuates her benevolent features. Zofia has been involved in great service to the community since. She also has her reasons for acting the way she did.


Elzbieta has one more mission in my mind. Zofia knows the whereabouts of the people who were going to shelter her from the Gestapo. She takes her there the next morning. Elzbieta thanks a man who helped save her many years ago- he is a dressmaker now- however he has no interest in talking about the war. This part of her story will remain unresolved. The war has complicated people’s lives immeasurably. The film ends with the dressmaker looking at the two figures on the pavement outside his window. It would make a great study one day: the use of windows in the films of Krzysztof Kieslowski. 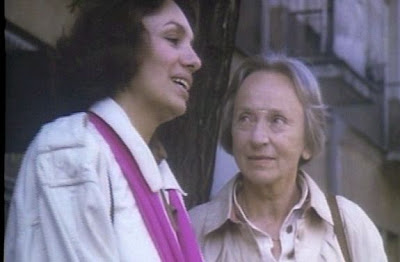 Posted by darren harrison at 9:36 PM