As a 20 year old, what do you do, and how do you feel, when you suddenly discover the man who you have always loved and thought was your father, apparently is not. Dekalog 5 is one of the most convincing of these short films as it depicts perfectly the complexities of an adult/ child relationship. Michal, in his nuanced and understated way, is thoroughly credible as the ‘father’ figure, and Anka is equally assured as the mature but emotional young woman battling to cope with what’s before her.


The issue of the existing letter with “To be opened after my death” marked on the front of the envelope has the potential to destroy their relationship. Both have known of its existence, but have ignored it for years. It is a final letter from Anka’s deceased mother for Anka’s eyes only. Lately her father has been leaving it lying around. He wants his daughter to finally confront whatever news she has, but doesn’t know how to bring it up. He suspects it might be about issues of paternity.

The beginning of the film depicts their strong emotional bond. It is a tradition on Easter Monday, it seems, that they pour cold water on each other when each person is unsuspecting. For Michal, it occurs when he is asleep in bed. Anka cops it when she is in a sheer nightie, about to take a bath. It is playful and charming, but it also suggestive of the games that lovers’ play. It adds an intriguing element to the relationship. They can’t, at this point, understand why, but there is no doubt that there is more than just a filial bond between them.  Both, for example, are jealous of each other’s partners. “I hate it when you go away” she says to him at the airport. Both admit to feeling guilty or unfaithful when having sex with their choice of partner. Anka has trouble playing a romantic lead opposite a boy for her drama rehearsals.


After Anka tells Michal she has read her mother’s letter, and spills the beans, they have a lot of sorting out to do. There is a long sequence where they looked trapped, in a lovers’ tryst, in a claustrophobic lift. It builds tension beautifully. Shortly after, in another beautifully realised scene, the two are sitting in the half dark with two bright candles. It is Anka’s idea to say that whoever’s candle goes out first has the right to ask a question. It is exactly what someone like Anka would say. It is far too dreamy and romantic for Michal to come up with. 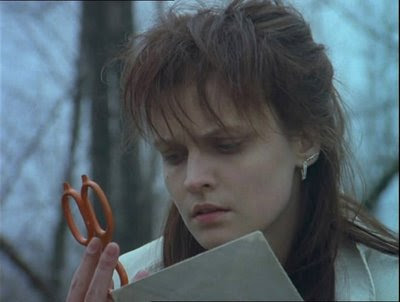 The most important sequence in the films takes place with little background noise and in a dimly lit room with close-ups of faces. It is reminiscent of Ingmar Bergman, particularly in its depiction of the emotional charge coming from a parent and a child (like Bergman’s ‘Autumn Sonata’). This is until Anka removes her t-shirt and is bare breasted. She invites her father to become her lover. Not being his daughter, it is a choice they can both make. The emotional and physical pull toward each other is undeniable. In the end, the burning of the letter tells them both that the past does not really matter. Of all the ten films in Dekalog, the relationship between Anka and Michal is my favourite. It’s complex and moving and very real and Kieslowski’s camera is assured and he takes the right amount of time to unfold an intriguing story.

Posted by darren harrison at 3:21 AM