DEKALOG 3: the return of the past

IMPORTANT relationships are hard to forget. Dekalog 3 is another film about a couple who have supposedly moved on from a former relationship, but still, and always will have, a strong affection due to a former intense association. In this case it is unbalanced because Janusz is in a new marriage with loving kids and it appears to be a strong relationship. Ewa, on the other hand, is alone, and has been for years, and it is cold, and it is Christmas Eve in Poland, and she is feeling sad and regretful. It reminds me a little of the end of ‘The Umbrellas of Cherbourg’, although Guy’s marriage is presented as stronger than Janusz’, and Genevieve is still married to Roland, and has her little girl, and she comes across as merely wistful in that film. 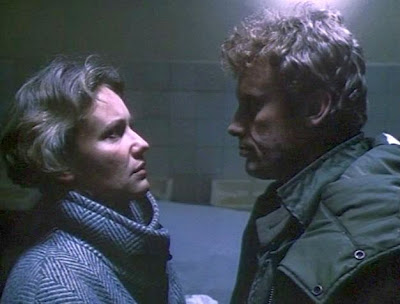 Ewa is a bit unstable, and she plays games in order to be able to survive Christmas Eve, ensuring  her former lover is with her the whole evening, and into the morning. Janusz is with Ewa helping her with her problems, instead of being with his wife and children. “Thou shalt remember the Sabbath and keep it holy” is the commandment here, although Janusz is hardly to blame for missing the family event. 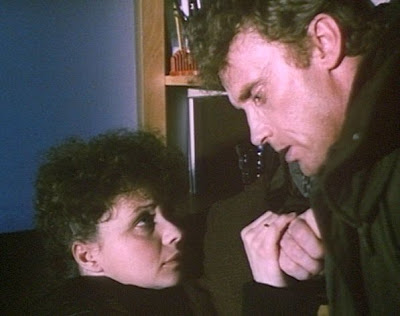 Initially, Janusz has the look of being burdened by events from the past. Ewa tells him her husband, Edward, has disappeared, and the whole evening is spent looking for him in places like casualty wards in hospitals. Janusz seems to somehow warm to his mission, and soon it becomes clear that he still has feelings for his soft-faced ex-lover. He is a willing accomplice in her games, and at one point, in her apartment, they almost kiss, until they come to their senses. Ewa is the classic femme fatale with her watery eyes and helpless looks ,almost  begging Janusz to be with her. Later she admits her deceit, and explains that her husband left her years ago, firmly establishing her lonely, displaced state.


There is a lovely Christmas feel about this episode- a suffused glow of coloured lights, soft, downy snow, some scenes of Christmas lights seen hazily and romantically through muted windows. It helps us feel Ewa’s pain. This is, however, not the strongest of the Dekalog films. I felt there was something intangible missing. An interesting exploration of relationships but perhaps not as intelligent or complex as most of the others.

Posted by darren harrison at 9:09 PM