It’s my birthday and I have spent the morning watching the first instalment of Krzysztof Kieslowski’s DEKALOG. I am captivated by his cinema in a similar way that I am captivated by Bergman’s films. They are full of ideas and meaning, about the big issues in life, so you feel you are not wasting your time.

Dekalog 1 is called ‘Thou shalt have no other God’s before me’, which must be the name of the first of the Ten Commandments. The title sums up the message of the film perfectly. A young boy, Pavel, lives in the city of Warsaw with his father (all the films use a massive apartment block as the physical landscape), and is visited sometimes by his aunt, his mother living elsewhere. Like the little boy in Haneke’s ‘The White Ribbon’, Pavel asks questions about the meaning of life, and ponders over, and is confused  by, the sight of a dead dog he was fond of, found freezing in the ice. His aunt offers him hope in the form of her Catholic point of view, however his father’s message is somewhat, gently, bleaker. The aunt tells Pavel that his father believes that ‘measurement could be applied to everything.’ As a professor at the university, his philosophy is the use of reason an scientific method. He tells his students ‘a properly programmed computer… may have its own aesthetic preferences…a personality.’ In his universe God has been replaced therefore b y technology. Faith and mystery subside, and intellect and reason triumph.

Unfortunately, his computer tells him that the frozen pond at the back of the flats should be solid enough to withstand three times his boy’s weight. Pavel  receives his new Christmas ice skates with glee, and ventures off to test his father’s theory with tragic consequences.


I love seeing parallels in films. There are obvious ones here with the famous drowning scene from ‘Don’t Look Now.’ In both films the father of the doomed child is busy at work, and an ink bottle is spilled, and dark ink is spread across his work (the ink is a blackish-blue in this film, and a blood red in the other). The spreading seems to work as a grisly portent to tragedy. In ‘Don’t Look Now’ by contrast, the father sees his child dead in the water, and drags her out, helplessly. He then roars in a private grief, howling into the atmosphere. In this film, in a chilling few minutes, Pavel’s father watches absolutely helplessly as his son’s boy, and that of a friend, is dragged by rescuers from the thawed pond. So much for science, and for his scientific calculations.

In destructive harmony with his beliefs, Pavel’s father desecrates the altar at the church and prepares for a newer, bleaker existence. The film seems to be endorsing the value of faith, although it can be seen that the faith-filled aunt is filled with sorrow, too. Perhaps her response is less fraught in some way.


Kieslowski likes to use symbols in his films. The frozen water bottle is a good example. Pavel has left it out overnight. It is frozen solid, but the bottle itself is cracked. It seems to be representative of the boy’s fragility. He is curious and intelligent and his future at this point holds so much promise.  There is a lovely scene, too, in which Pavel, like any other child, is mesmerized by his new skates, and can’t sleep through thinking about them, and the promise they hold. He lays in his room, in a lovely blue light, and tells his father he is watching them gleam.


Sylvia Plath in a BBC radio interview in 1962 ruminated on what she saw as the important themes poetry should explore:"... I cannot sympathise with these cries from the heart that are informed by nothing except a needle or a knife, or whatever it is. I believe that one should be able to control and manipulate experiences, even the most terrific, like madness, being tortured, this sort of experience, and one should be able to manipulate these experiences with an informed and an intelligent mind.  I think that personal experience is very important, but certainly it shouldn't be a kind of shut-box and mirror looking, narcissistic experience. I believe it should be relevant, and relevant to the larger things, the bigger things such as Hiroshima and Dachau and so on." 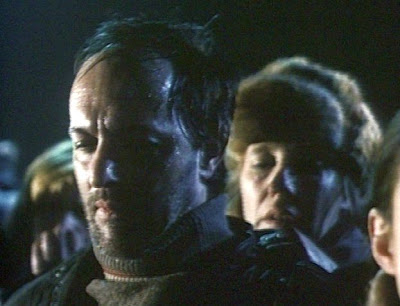 I think Kieslowski endorses these ideas too.

Posted by darren harrison at 6:45 PM