'Never a warm leaf to unfold': Lawrence and the impact of the Great War


NOW  I have read a few little novellas, first published in 1923 together in one volume: The Fox/ The Captain’s Doll/ The Ladybird- D H Lawrence. World War One had a profound effect on Lawrence’s writing, as it did many other writers. We can see it clearly in the themes embedded in these stories. It is not surprising when we consider that Lawrence was forced into exile at this point by British authorities, who were uncomfortable with Lawrence for a few reasons: he was living, in 1915, in Cornwall, a place in which it could be argued that you could collude with the German navy. He was by this time fairly newly married to one Frieda von Richthofen, cousin to the ‘Red Baron.’ He and Frieda went for late night walks with their torches and sat inside their cottage singing German folk songs. And above all, Lawrence was a writer, and excused from war time services after a humiliating episode that occurred at Bodmin barracks (described in the ‘Nightmare’ chapter of Kangaroo.)  He referred to the episode in a letter as a ‘spiritual disaster.’ The key idea, I think, that the three novellas deal with is the idea of the impact on the individual of war, and his or her dehumanisation as a result. War has created damaged people and damaged societies, and this theme was an obsession with Lawrence from his early story ‘Odour of Chrysanthemums’ in1914 onwards.

The least interesting, for me, was The Ladybird. Its major characters have all suffered loss, and know people who have suffered imprisonment and serious wounds. On his return from war, Basil is a much changed man. Lady Daphne (based on Lawrence’s real friendship with Lady Cynthia Asquith), yearns deeply for the return of her husband from war as the Armistice approaches. Waiting for him she thinks of his body, ‘beautiful, white-fleshed , with the fine sprinkling of warm-brown hair like tiny flames.’ She remembers their ‘loved-days’ and their shared ‘lovely, simple intimacy.’ The Ladybird reminds us, on Basil’s return, of how much the war altered people, and destroyed relationships. The first thing that Lady Daphne notices is the scar. For Basil, seeing his wife again is a miracle. She is no longer a girl, but a woman now. His eyes quickly scan her face, her throat, her breast. She has trouble reconnecting and doesn’t want to touch him. He has become ‘like risen death’ to her. She secretly holds in her hand a thimble which contains the ‘ladybird’ crest, given to her by Count Dionys. The Count, a German prisoner at Voynich Hall, has usurped her husband’s place in her affections, and she has visited the Count several times whilst her husband has been at war. In Dionys, Lawrence presents us with a sympathetic psychological portrait of the enemy. It was the dehumanization of the enemy that was one of the things about wartime that appalled him. War time alters things between people for ever. 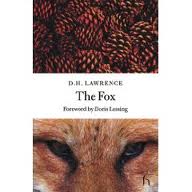 The Fox is a much better story. And the weight of the war is everywhere in this story as well. It is because of the war that two women- March and Banford- are running a farm together, when ordinarily these women might have married. Their potential husbands are at war and are possibly being killed. They have a young male visitor who becomes like the fox that kills the women’s chickens. He is like a predator as he sets his sights on March. And there is a none- too- subtle fire within Banford as she, jealously, worries she will lose her friend. Henry Grenfell is insistent on March marrying him. The mere touch of Grenfell troubles and confuses  March as he delves deeper into her psyche: ‘..he drew her gently towards him and kissed her neck, softly. She winced and trembled and hung away. But his strong young arm held her, and he kissed her softly again.’

Grenfell is sly like the fox, and equally dangerous. Much later he literally gets rid of his opposition in the guise of a falling tree that kills Banford. I remember travelling through the Berkshire countryside in 2002, not far from where Lawrence was living in Chapel Farm Cottage where he wrote a good portion of The Fox. There was a pub that we passed called The Fox, and it looked 17th or 18th Century, so it made me wonder. The woman who now lives at the cottage found a fork with the initials DHL printed on it in her back garden. I wrote to one of Lawrence’s chief biographers about this via email, and he was unable to verify whether or not the Lawrence’s made imprints on their cutlery.

The third of the trilogy of novellas is The Captain’s Doll which is a lighter and more fanciful story, beautifully written, but containing its dark passages too. The germ of the story came to Lawrence when he and Frieda visited Frieda’s wealthy sister, Nusch, and her family, at Zell-am-See for a month in Austria from July 1921.  Lawrence found it impossible to write here, but it was restorative and before he left he was able to set foot for the first time on a glacier.

In The Captain’s Doll, we are given a fascinating snapshot into life in the defeated territories after the war. Inflation is rampant and poverty and corruption abounds. The most significant section of the novella takes place at one of the afore-mentioned glaciers, as we are witness to an excursion to the glacier by Hannele (the Frieda character) and Captain Hepburn (the Lawrence character.) The pair have climbed the sheer rock face and find themselves at a great height overlooking the valley and a multitude of streams and rivers rushing downwards in waterfalls and cascades. Both are exhilarated, yet they are ‘not in good company together.’ Hannele exclaims ‘wonderful! wonderful!’whilst Hepburn’s response is ‘Yes- and horrible. Detestable.’ He says he is no ‘mountain-topper’ which places him at odds with the healthy young locals, bare arms and bare chest, with all the trendy mountain gear- the knapsack and alpenstock, the ‘ghastly fanged boots’, all of which Hepburn finds ‘repulsive.’ He admits to hating people who are ‘prancing on mountain-tops and feeling exalted’, hating the mountains for their ‘affectation’, whilst she describes them in awe-struck terms as ‘god’s mountains.’

They finally arrive at the main glacier, the unhappy couple, so at odds with each other! Hepburn it seems is reluctantly fascinated by the whole thing, and is determined to climb all over it. Hannele wisely keeps her distance. Then he peers over the edge and sees a world of ice: ‘a terrible place of hills and valleys and slopes, all motionless, all of ice.’ And he is frightened of it. Once he descends, safely, he is full of emotion, but can only comment, bitterly :’I’ve been far enough. I prefer the world where cabbages will grow on the soil. Nothing grows on glaciers.’

So why does Hepburn have such a repugnant view of the glacier? For me the clue lies in the fascinating and telling response he has to what he has witnessed:’ Never a warm leaf to unfold, never a gesture of life to give off. A world sufficient unto itself in lifelessness, all this ice.’

Hepburn experiences the glacier as a place of death. With his focus on war and the atmosphere around him, the natural world has turned sour and left him with bitter feelings. Everything is sterile. Especially at this time, with the war machine in full swing, life is especially precious to Lawrence, and real feeling, real emotion, real human contact is everything. The war tainted his thoughts and his subject matter and the characters in his books as he wrote them for the rest of his life. 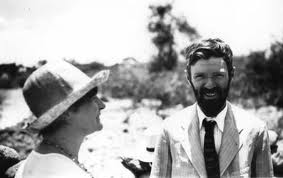 Posted by darren harrison at 4:53 AM

Posted by darren harrison at 5:08 AM