RECENTLY I have read the necessary books for school, and amidst the usual to and fro of events at home have squeezed in two well known novels whilst listening to the wild cockatoos screeching in trees in Torquay at night. 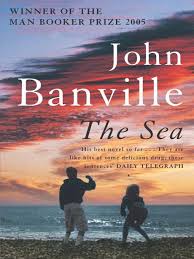 I enjoyed the first half of THE SEA (JOHN BANVILLE).  I became involved in the mysteries surrounding the past lives of artist Max Morden, and his shifting erotic affections for his friend Chloe’s mother Connie, and later the family’s nursemaid, Rose. And he, remembering momentous events of the past, and helping to revive those memories, driving back in middle age, to the place these events occurred. The first half of the novel is mostly driven by Max’s interest in Connie and his developing awareness of her family. The second half, and less successful for me, was about Chloe who Max develops an interest for, and her mute brother, Myles. Meanwhile Max’s wife Anna dies (she is discussed obviously as part of Max’s adulthood), and Banville takes us back to Max’s childhood again in which Chloe and Myles both drown.

John Banville has an extraordinary vocabulary, and many interesting words are littered throughout his novel. This is just an example of the ‘c’ words:

caducous: adj. falling off easily or before the usual time
catafalque: n. an ornamental structure sometimes used in funerals for the lying in state of the body
cerement: n. a shroud for the dead
cinereal: adj. resembling or consisting of ashes
congeries: n.pl. aggregation, collection
costive: adj. affected by constipation; slow in action or expression
crapulent: adj. relating to the drinking of alcohol or drunkennesscraquelure: n. network of fine cracks found on the surface of some oil paintings

crepitant: adj. having or making a crackling sound

I have a similar experience when I read books by Zoe Heller. She also chooses her words thoughtfully and imaginatively. However with Zoe Heller there seems to be a lovely flow to her unusual words. Banville’s words I found off putting, like he seemed to be showing off. Perhaps there were too many clever words and it came across to me as self conscious.

The main bit in the denouement involves the drowning of the children. By this point I had become a bit tired of the novel. The current occupants of the lodging house called the ‘Cedars’ that Max has returned to are an ex-army Colonel and a house maid, linked to the catastrophic events many years before, but uninteresting. The slow death of Max‘s wife is also drawn out.

The Sea is beautifully written, however the narrative chopped and changed too much for me and I found the new characters in the second half of the book less compelling . An interesting concept though- to revisit the place of your youth in which momentous events occurred.  Something terribly sad about the idea as well.

A key question imposed by the novel is in regards to the level of culpability we should inflict on those who followed the orders of the SS in Germany during the Second World War. Hanna and the other German officers allowed a large group of Jewish prisoners to burn to death in a church that has been bombed. They should have opened the doors and let them out. Hanna’s involvement is complex because she harbours a secret that implicates her in crimes  she may have otherwise been not guilty of. Her extended time in prison therefore is a tragedy, however Michael unfailingly tries to keep her spirit alive by sending tapes to her.

We see the preparedness of the SS guards to let the 300 Jewish women burn as heinous and insufferable. For me there are many Holocaust stories, both fiction and non-fiction, that are far more compelling. Hanna was not an evil character, and I found myself wondering if Bernard Schlink wanted us to empathise with Hanna.  At the end of the story, perhaps, but perhaps not in the course of the events that took place in the war. The ability to forgive is always important and powerful, not to mention healthy. The film ‘Dead Man Walking’ deals with this concept powerfully. And the Australian film called The Father, with an elderly and brilliant Max Von Sydow, deals with similar themes to those that appear in The Reader.

Posted by darren harrison at 3:24 AM

Posted by darren harrison at 5:10 AM