IN an essay published in the London Review of Books in 1993, Scottish author and essayist, Andrew O'Hagan wrote about the tragedy that is/was the murder of James Bulger by two ten year old boys:

' The abduction and murder of James Bulger, a two-year-old boy from Liverpool, has caused unprecedented grief and anger. Hours before the two ten-year-old boys accused of the crime arrived at South Sefton Magistrates’ Court, a large, baying crowd had formed outside. As a pair of blue vans drew up, the crowd surged forward, bawling and screaming. A number of men tried to reach the vehicles, to get at the youths inside, and scuffles spilled onto the road. Some leapt over crash-barriers and burst through police cordons, lobbing rocks and banging on the sides of the vans. Many in the crowd – sick with condemnation – howled and spat and wept. Kenneth Clarke has promised measures to deal with ‘nasty, persistent juvenile little offenders’. Those two little offenders – if they were the offenders, the childish child-murderers from Walton – were caught on camera twice. First, on the security camera at the shopping precinct in Bootle where they lifted James, and again by the camera of a security firm on Breeze Hill, as they dragged James past – the child clearly in some distress.'

The whole shocking incident was sickening and I will always remember reading about it years ago. When I was in Maidstone in England in 2001, the Headmistress of the school I was teaching at spoke of the horror she felt in regards to the newest details- not that the two young offenders were going to be released into a society somewhere, but that the howls of contempt were rising from the British public again. I saw her condemnation of the latest hysterical hatred and derision as a voice of reason amidst the chaos in the tabloid news, and I thanked her for it.

It was a disgusting and sickening act. But as O'Hagan says, somewhere else in his essay, it was also a crime to release the names of the offenders- Venables and Thompson- because two more lives were destroyed as a result. Add to this Kenneth Clarke's comment quoted above- (promised measures to deal with) 'nasty, persistent juvenile little offenders' and we have enough revulsion for a lifetime. 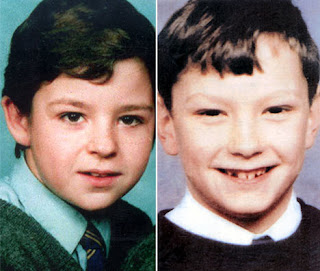 Posted by darren harrison at 2:26 AM

Did you know that Scotland Yard witheld details about the sexual nature of the crime? An intriguing dimension, given that one of child murderers has since been charged with child pornography offences.

Why could it be a crime to reveal their names? I believe the family ought to know and the public too. Eight years at a "prison school" and then being free seems a very soft punishment to me. They got an education and therapists to console them. Why should James' parents worry about running into them again. Why should society risk the lives of other people/children? To me they should stay in prison. Then we can discuss conditions in prison, but that is another debate.