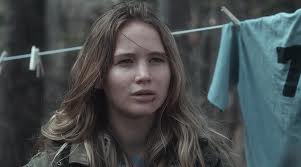 BESIDES being a well scripted, well acted and compelling film, Winter’s Bones provides an interesting education. As much as anything, it seems to be about the current state of the US economy, and in particular the way in which downward economies hurt the poor and dislocated people the most. The territory explored in the film is the area known as the Ozarks, a hilly and heavily wooded rural area of Missouri. A couple of the principal locations were specifically Christian County and Tayden County, evidently at the centre of the Missouri Bible Belt, a Republican stronghold since at least the end of the last world war.


Jennifer Lawrence has little film experience, but she does a convincing job of playing a stoic seventeen year old who has to grow up too quickly by being saddled with a psychologically damaged mother, who is virtually a non-entity, and a young brother and sister who are in desperate need of good parenting and good role models. Lawrence, called Ree in the film, provides some stark education for her young siblings in the possible advent that they might find themselves without her. She teaches them to shoot and skin squirrels- ‘do you want them fried or stewed?’, and how to use guns as well (the youngest, a six year old girl, helps Ree pull the trigger).

The people in this part of Missouri are not satirized in any way- in fact for all the bleakness that is explored as part of their predicament and condition, you get the feeling they would welcome this film as a sober message that might be sent to Barak Obama. However they may feel differently about previous attempts to capture their way of life: the satirical slap in the face that was the TV show, ‘The Beverley Hillbillies’, and the grim and shocking critique that was ‘Deliverance.’ There is tenacity in the people in Winter’s Bones that some may see as admirable. There are some warm scenes involving singing and banjo playing. Life is tough but people get on with it. However, dependence on drugs to make a living, the awful attitude of revenge, the lawlessness and ‘local rules’ that seem to be on display, are all seriously worrying signs for a community that is struggling to survive, let alone make it.


My favourite scene in the film is when Ree, desperately in need of money to support her family, visits the local army recruiting centre. I can imagine any number of local Missouri men and women fighting in Afghanistan. Ree is determined and practical, and it is absolutely right that she should be totally honest about admitting that her sole motivation for wanting to join is the money that she will receive. Happily, the recruiting officer, playing his real life role, interestingly enough, tells her that this is not a good reason alone for wanting to be a soldier, that she is too young, (being only seventeen), and that right now her mother and siblings all need her to be with them at home. It’s a relief to hear caring, sensible advice.


Winter’s Bones is stark and very gritty, and although I would have no interest in seeing it again- unlike, say, the multi-layered White Ribbon which was one of the last films I saw- I’m glad I did see it. It told me something about the people of the Ozark region, it brought to the screen a great new talent in Jennifer Lawrence, and it is an American film without the tackiness, cheapness, falseness and shallowness of a Hollywood film. No special effects. No gratuitous violence. No sexual assault. No excessive use of guns. No melodramatic chase sequences. So it’s great that it was even made. 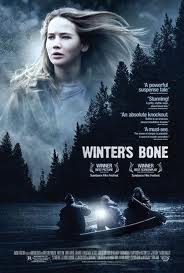 Posted by darren harrison at 8:48 PM

I recently watched this film and found it to be gripping in the way the narrative unfolded. Exquisite evocation of setting, complex characters and clever cinematography all contributed to the moody atmosphere of the film. I agree, Jennifer's acting performance was powerful, a real talent has been discovered. As for the social issues explored in the film, well, I have strong opinions about the layers that were explicitly and implicitly exposed. It was indeed one of the most realistic and disturbing representations of such communities (especially the violence from the women). That said, there was a light to the film, probably shining through the main character and her relationship with her siblings. Winter's Bone was for me, a "terrible beauty" of a film. One that I would actually watch again.