IN Colm Toibin’s BROOKLYN, Eilis makes the sudden decision to leave her mother and friends in small town provincial Ireland to return to Brooklyn and a future that is more daring, filled with promise and potential, but infinitely risky. She does this because she thinks this course is the one that is most likely to bring her happiness. 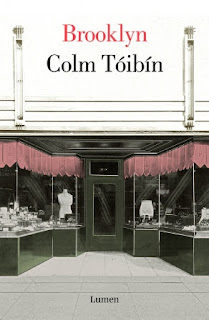 In Alex Miller’s equally beautiful CONDITIONS OF FAITH, Emily Elder makes the sudden decision to stay in Europe and abandon her French husband and her new born child. It is a decision that is even more risky and momentous than Eilis’. When she tells her husband Georges of her decision whilst they are dancing at a Paris nightclub, he asks her ‘why?’, which is a fair enough question. She tells him it is because she is not content. His response is ‘Content? For Christ’s sake, no-one’s content.’ 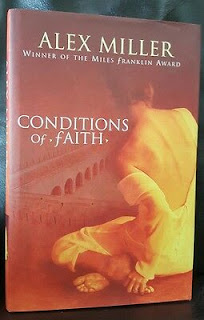 They are both interesting ideas because they are weighty decisions filled with risk. Each person knows something is lacking and they know they just need something more. To say that ‘no one’s content’ seems pretty meaningless to me. These are the cowards like most of us, me included, who travel on the road already taken, and are not prepared to risk everything for a life that could be so much better. Maybe the doors haven’t opened sufficiently. Maybe the mindset will mean that the doors will never open up, or widely enough. The world is filled with risktakers like Eilis and Emily, but they pale into significance when compared with the multitudes of us who settle for what they have.

It must be about security. It is just too scary to risk giving up all you have strived for. Joni Mitchell, in her song HEJIRA, sings ‘You know it never has been easy/ Whether you do or you do not resign/ Whether you travel the breadth of extremities/ Or stick to some straighter line.’ Mmmm… ‘travelling the breadth of extremities.’ It sounds easy enough.

Georges said ‘no-one’s content’, and I wonder how true this is. I read somewhere, posted on a wall for everyone to see, that you should be careful criticising someone else because you never know ‘what particular shit they may be going through.’ In many ways, I would love to be someone like Eilis or Emily. I don’t mean chucking everything in, after all that’s not what they were doing. They weren’t suicidal. Emily was wanting to continue her archaeological studies and her European adventure. Eilis was going back to Brooklyn to meet her husband and start their American dream. Both wanted more of being foreigners in a foreign land.

If there is anything that would make me truly happy, or even ‘content’- Emily’s word-( I am not even sure how close to ‘happiness’ this is),  it would be to go back to being a foreigner again. Van Morrison on ASTRAL WEEKS says ‘I’m nothin’ but a stranger in this world…’. Both Katherine Mansfield and Sylvia Plath were strangers in a strange world. Both refused to go back to a potentially easier life with family in their home lands.

Twenty years ago, almost to the day, I arrived in the UK with my wife and began a European adventure of my (our) own. I dreamt of the day multitudes of times growing up where I could have Cornwall, Somerset, Yorkshire, Northumberland, Shropshire, at my fingertips. And then suddenly I did. I had experiences I will never forget, including motoring holidays around Italy and France and Switzerland. But was I content? After just over two years of this I suddenly wanted to ‘come home.’

Coming home. I will probably take this to my grave as the biggest mistake of my life. I look at Emily and Eilis with profound respect for the decisions that they made, how they chose the road not taken. But if we are ever going to live a life where we ever feel even remotely ‘content’ we have to live with these decisions, or doing something extraordinarily wild and unpredictable, and ‘travel the breadth of extremities’ like the trailblazers that have done this before us.

So, I salute those who are foreigners in foreign lands. I wish I could join you. But I also know many of you have given up important things and made extreme sacrifices along the way.

‘And now I live In this town I walk these dark streets Up and down, up and down Under a dark sky And I dream That one day I'll go back home’

I have no doubt that Eilis and Emily thought of home every day. And perhaps Sylvia and Katherine as well. Were they content? Well, illness and fate always play a part. I like to think that things worked out well for the fictional Eilis and Emily. For Sylvia Plath and Katherine Mansfield… the former took her life through gassing herself at age 30, and the latter died of tuberculosis at just 34. For the rest of us? Well we live a lot longer- most of us- snug in our protective cocoons, a satisfying, safe life, or a life devoid of mystery and filled with mediocrity… depending on your point of view.

Happiness...an elusive state of being. Always to be discovered in one's worth and not in one's actions - "You can run to the end of the highway and not find what you're looking for/the world won't make your troubles disappear" Keith Green.
Enjoying your writing Darren. It has a rhythm and lilt to it. It trips along...reminds me of running through the rain and dodging the puddles many years ago with Hellsy beside us, making our way to the 'Umbrellas of Cherbourg'.
Don't stop writing...especially as it is who you are and I assume - instills happiness...
Jenni

Wow, I think I've just worked out who 'Unknown' is- thanks for the feedback. I appreciate it.