In The Company of Men 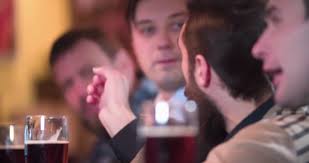 I HAVE been in the company of men quite a lot lately, unusually for me. Usually it’s women. Women and girls. Women and girls at home. Women and girls at work. Lots of sensible conversations about food and travel, and maybe hopes and regrets. But generally safe topics, and certainly nothing sexist, or sports-related, or too controversial. Rarely politically motivated.  I don’t mind it not being sexist. I don’t particularly find sexism interesting. For me it’s like racism. Something else I don’t tolerate too well. But sometimes I am starved for conversations about sport.

So being in the company of men quite a lot more than usual has been fun, and rewarding.  And a little bit different. Fresh topics, a different way of talking and thinking in a sense. Talking to men a lot has been a sort of thrill in a way; a thrill I don’t often experience with women. I come out of these conversations with men with a kind of buzzing feeling. Maybe because it feels so normal and makes me feel normal. Maybe we’re all supposed to spend a lot more time with our own sex. It’s something like D H Lawrence would say.

I joined this book club months ago, and coming away from this, on a Wednesday evening once a month, I’m often buzzing. I am sometimes a bit lazy about wanting to go. Especially if it’s cold. But it’s only in Brunswick, and the pub is lovely. It’s all men. The number varies. You find out the name of the book for next month at the end of the night and you have one month to supposedly read it. There is a kind of circle. We introduce ourselves by making a few comments about what we have done that month. Most people have done something. Except for me. Often I have done nothing of any interest to anyone, but I try and find something to say. This is a great part of the night. Sometimes someone has struggled a bit the past month, and that’s interesting. Others may have had a quiet month like me. Others, still, may have gone somewhere interesting or experienced some joy or tragedy.

Last month somebody’s mother had just gone into hospital. Somebody else is sleeping at different houses on various nights of the week. A man always brings his dog, and you can just the love between them.

We have a kind of leader or presenter who has questions. He invariably starts with ‘who has read the book?’, and funnily enough, quite a few people haven’t read it. They’re not just there for the book. See we go off on tangents. If I haven’t read the book, I still manage to think of something useful to offer. You don’t agree with everything, but it is so sedate and supportive that it doesn’t matter. Everyone seems intelligent and experienced and they say things that make you think ‘wow, he really knows what he is talking about.’

It’s the same book for everyone, across all these groups called ‘chapters’. That term is probably the only pretentious thing about the whole group. Men swear and laugh and make personal connections, and drink beer. But nobody scoffs or teases or makes you feel a fool. We like it when we get to see a sliver of pain, or uncertainty, or weakness. Or at least I do. There are not many cocksure men there. If they were to be cocksure, why would they feel a need to attend?

The books have included works by John Steinbeck, William Faulkner, David Malouf, Toni Morrison, Sophie Laguna, Douglas Adams, Ernest Hemingway and whoever it was that wrote Sherlock Holmes. Besides As I Lay Dying, I haven’t really liked any of the books that much, but it hasn’t spoilt the experience for me. I have left feeling this lovely, real or imaginary, connection, like I have a place somewhere, that there are others on a similar level.

The other all-male experiences include men I have met whilst my daughter is having swimming lessons. Two men, separately, in fact. A guy called Simon is really lovely. We have this rapid-fire conversation on topics most Saturday mornings that we both know we enjoy. Each other’s family, football, travel, education, and especially politics. We are similar in all of these things, and not being challenged, but instead vindicated, at every opportunity, is refreshing. Simon and I don’t meet up anywhere. Maybe we would if his kids were female like mine. But it’s lovely just to pick up that same thread each time on a regular Saturday morning.

Last week the space occupied next to me was filled, so I only waved to Simon in the distance. It was filled by somebody called Eden. Another lovely guy, a bit younger than me, and funny thing is, we talked about much the same enjoyable things that I talk to Simon about, and the whole thing had the same effect of it being warm, and relaxing and life-affirming and gratifying. I’ve only met Eden once. Next time, who knows, maybe me, Eden and Simon can find a place to sit like we are in a triangle, somehow, and the conversation might swirl round and round like a whirlpool or a roundabout.

Finally, on the subject of the company of men, I had a very different experience just yesterday. The fathers (and a sprinkling of mothers) of my daughters’ school played football with the parents of children at a neighboring school. It was a fundraiser, so although it began fairly casually, with regular Sunday afternoon training sessions, it culminated in this big event at a nearby oval where a good number of both schools’ community attended and there was a BBQ, clothes stalls, food stalls, face painting, etc, etc. Although the actual match prohibited tackling, all the players played with a strong level of earnestness and there were plenty of physical encounters in marking and trying to trap the ball. 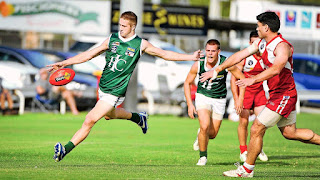 The rooms before the start of play had the atmosphere of a fairly serious football match: there were rub-downs, plenty of taping, Deep Heat, stretching, prep talks, strategies announced in the coaches’ address, and even a positional whiteboard. It was all a bit unnerving for someone like me who hasn’t played competitive sport of any nature for a good many years, especially a contact sport like football. I had younger and more physical and nuanced players bouncing off me, knowing when to run and when to hold back, attacking the ball with a vigour that I thought was reserved for professionals, and surging through tiny gaps. It was for me, needless to say, a bit like a foreign language, and by the end I had newfound enormous respect for every AFL or AFLW football player.

The whole experience was not as fulfilling as it might have been. I didn’t, at any stage, feel quite the camaraderie of previous all-male experiences. But I’m glad I did it and set myself little challenges. It is, however, my very final competitive football match. The legacy of yesterday’s three-hour journey is swelling and a large bruise on my left shin (someone fell across my leg), a sore foot where I accidentally kicked the turf instead of the ball, and worst of all, a swollen left middle finger that throbs intermittently and may possibly be broken. Here I sit, whilst starting and finishing this, at a medical clinic in Moonee Ponds waiting for some doctor to pore over my sorry x-ray.

Being with men might bring some physical pain, especially when there is a battle, but most of the time it is a battle of wits, a mind trip, a bond or connection that makes you feel real and good about everything and understood somehow. Now if only some of the men liked the same music as me. That would add another lovely layer.
Posted by darren harrison at 4:50 AM