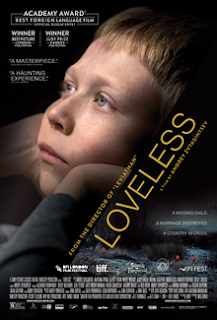 LOVELESS is one of those beautifully made, atmospheric Russian films that has garnered a lot of attention. Once upon a time I saw every Russian film on offer that was said to hold promise. My favourites were ones by Aleksander Sukorov. I bought a box set of Tarkovsky films. I remember Burnt By The Sun with incredible fondness. Another one called The Return by Andrey Zvyagintsev.

This one I saw today, LOVELESS, is also directed by Zvyagintsev.

In the spirit of What Maisie Knew, the married couple (whose marriage has disintegrated and are in the throes of separating, but are still living with their twelve-year old son in a Moscow apartment) are continuously fighting and saying horrible things to each other and abandoning their responsibilities as parents. The mother, Zhenya, is particularly cruel in her open loathing of her only child, seeing in him the image of her husband, regretting not having an abortion and getting involved with Boris as an escape from her tyrannical mother.

The film opens with Alyosha walking home from school in a lonely, absent- minded way, cutting through the forest besides a lake on his way to the apartment. Unlike many schoolboys excited by the end of the school day and anticipating seeing his family at home, Alyosha must be dreading the evening he is about to spend at home. It is little wonder that his movements are languid and distracted. He finds a trail of long, plastic ribbon and hurls it into the air, watching it catch onto a suspended bough. It hangs, grimly, like a flimsy rope, and throughout the film I couldn’t let go of that haunting, potentially foreshadowing image… a hanging, from a tree…

The plot is pretty straightforward. It is a relief when the couple separate. After all, they are already cemented in new relationships. The deep loathing leaves no room for possible reconciliation. If ever a divorce was needed, it was this one. Unfortunately, though, the son has suffered through the fighting, and has overheard comments no child should ever here, of mutual parental abandonment. He hides, chillingly, behind a door, his face tortured with anguish. He takes himself off to bed sobbing uncontrollably about the unfairness of the world. No-one comforts him. Earlier, he is called a cry baby. From his mother, no maternal connection, just loathing. It is as though he is a nuisance and a stranger, somebody his parents were lumped with by a third party.

The negligent parents go about their daily lives- the mother pampered at a salon in a long scene, preparing to see her boyfriend, and later enjoying sex in his dimly-lit bedroom. The father is often shown at work, eating his lunch with a colleague, and fretting over the strict policies of his Christian-crusading employer who does not tolerate divorce from his employees. All this goes on while the child has apparently run away from home in search of badly needed solace elsewhere, and his parents take a long time to realise. The Moscow police do not take much interest so it is up to a diligent independent search team to try and locate the boy. This takes up a good portion of the film- searching the forest, asking another boy from school questions, searching an abandoned building and sticking up missing child notices everywhere. The director teases the audience with slow, forward moving tracking shots, encouraging us to think that he is about to be discovered, to no avail. To their credit the mother and father do take the three hour car journey to the city to see if he is staying with his obnoxious grandmother, however, once again their egos are front left and centre as they fight uncontrollably, harsh words spoken, their joint effort once again torn asunder.

There are the usual red herrings and moments of hope- those times that (from real life) Madeleine McCann’s parents might be able to relate to. Somebody of the boy’s age has wandered into a hospital. A body matching the description of Alyosha is waiting for them at the city morgue. Here, at the morgue, their grief is real, visceral, and it seems at last that perhaps the emotional cord that usually ties parents to their children might have surfaced. It takes the sight of the mutilated body of another person’s child for the enormity of their lack of responsibility to hit home. We see helpless, tortured sobbing from both parents. Initially we think it is their child. The fact that it isn’t, tells us that the enormity of their selfishness has hit home at last.

In his song ‘Raised On Love’, Justin Hayward sings of the bounteous joy of growing up in a loving home with a loving family:

John Lennon, on the other hand, speaking also from experience, sings in ‘Mother’:
‘Mother, you had me but I never had you,
I wanted you, you didn’t want me.
So I just have to tell you
Goodbye, goodbye.’

It is obviously the latter that applies here. This is the ‘Loveless’ that embodies the title of the film. But Russia seems ‘loveless’ in other ways as well. The absolute loathing that the mother and the daughter have for each other- Alyosha’s mother and grandmother. There is nothing between them. The landscape is cold and loveless. It if forever raining and the river and the forest seem incongruent with the city backdrop. The abandoned building that is explored in beautiful cinematography is cold and chillingly barren and wasted. There are those ubiquitous moments where everybody is on their phone. It seemed sad but reassuring in an odd way that people in Russia are wedded to their phones on public transport as they are in my world in Melbourne. Alyosha’s workplace is sterile, rows of people hammering at keyboards. And then there is that tragic image of the mother being pampered at the salon for so long, oblivious to the machinations of her son’s troubled mind. When she does finally realise the truth, she rings her estranged husband at work. His implacable attitude to needing to remain at work is sickening.
The boy is, by the way, never found. We never see him dangling from one of the trees in the forest after all. Which is of some comfort I suppose, but by then the audience is worn down by the relentless futility and shades of Gothic horror that we neither care or expect it. Victim he remains. 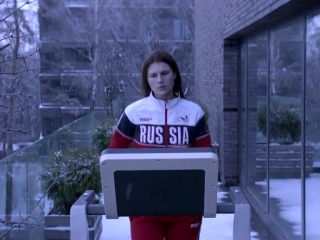 The final shot of the film is of Zhenya on a treadmill on the front porch of her family home. She has all the material wealth she could ever envisage, the creature comforts of bourgeoisie living, sans love and joy, and love-making in dimly-lit rooms. Her gaze is steely, steadfast. She is wearing a tracksuit top emblazoned with RUSSIA on it. The connection is unmistakable, and one wonders what Putin would make of it.

The father on the other hand? A new baby screaming in a cot in another ‘loveless’ state. The whole family straining, suffering, harrowed. 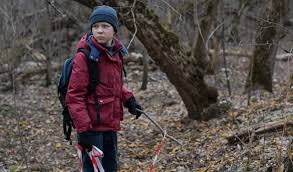 Posted by darren harrison at 9:27 PM