I HAVE decided to put together my written and photographic memories of living overseas into an on-line book. It stems from the period 2000-2003. This will be the preface. it will be time-consuming but fun. the next best thing, perhaps, to actually going back there to live.

I WILL never forget the first days of the beginning of our pilgrimage after arriving in England towards the end of the year 2000. We had got married in Sunbury, spend a few weeks in Sri Lanka, then caught a train to London from Heathrow, then a bus to Bearstead near Maidstone, Kent. Simon Read collected us in the pouring rain at night. The next day, still no doubt jetlagged, we sat in Pauline’s conservatory. She placed a thick hardback in my hand. It was a book about English towns and villages. In my heightened and excited state, I had not fathomed our relative proximity to places like Italy, France and Austria. It was enough that it was England on our doorstep. England, my England. The names and maps ran off the page, like the Melbourne ‘Melway’, but a thousand times more exciting. Lower Slaughter, Gloucestershire. Kelmscott, Oxfordshire. Mevagissey, Cornwall. Haworth, Lancashire. Bambridge, Northumberland. Much Wenlock, Shropshire. The names rolled on and on, all inspiring. I used the index and found many names that were familiar because of my research and reading. Morris, Lawrence, Plath, Hardy, Burne-Jones. Towns associated with glorious people. Even little Edenbridge, quite close by, where Lawrence stayed with Edward Garnett. My imagination ran wild and I felt like I had entered a new, golden sphere, a little like the character in the Woody Allen film called ‘Midnight In Paris’, who finds himself in 1920’s Fitzgerald-era Paris. Except I hadn’t travelled into the past. The present, alone, was entirely sufficient and satisfying. Pauline’s little conservatory was crackling with life and electricity. 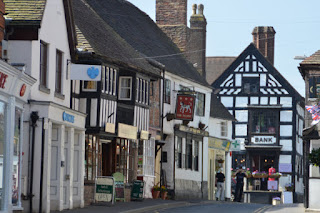 Posted by darren harrison at 10:10 PM