Self obsession and insecurity- the American years of Sylvia Plath 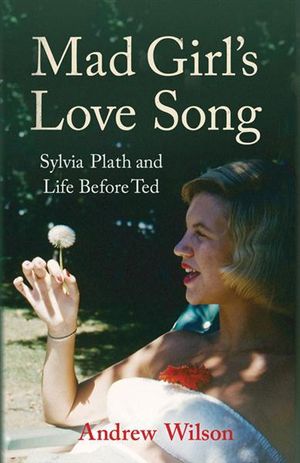 I HAVE had this kind of fascination with Sylvia Plath- the writings and the life- for about thirty years. It strikes me that this is a long time, and because of the longevity of my interest, I think I can assume that I will always have this interest in he
Now I have read yet another book about Sylvia Plath: ‘Mad Girl’s Love Song’ by Andrew Wilson. I was, potentially, ‘Plathed-out.’ But this is the first book, as far as I know, that goes into a great amount of detail into Plath’s pre-Ted Hughes phase. It pretty much ends when Hughes and Plath meet at Falcon Yard, Cambridge University, early in 1956.
We can glean a fair amount from Plath’s Smith College days from ‘The Bell Jar.’ What this book shows, through its extensive interviewing of Plath’s living associates, is that ‘The Bell Jar’ resembles autobiography fairly closely. Plath had, literally it seems, hundreds of dates in her college days. It is fascinating to see the claustrophobic imprint of the 1950’s upon her in her battle to be independent, to refuse to marry young and comfortably and conservatively, and to hold onto her virginity as long as possible. She continually mixed in Ivy League circles, predominantly young, intelligent and wealthy men from Princeton and Harvard. The encouragement to have sex and/or marry as a supportive housewife and faithful bearer of offspring to an ambitious male must have been enormous. To her credit, she held out. Many of these men must have recognised the brains, the ambition, and the incredible literary promise, but how many of them really cared about these things and focused instead on the long legs, attractive face and potential security instead?  Indeed, how many were aware of how complex Plath was, and that underneath all the promising charm there was a psychological mess, a self- doubting fatherless suicidal time bomb?

Plath’s female contemporaries, it seems, were well aware of her literary potential, as well as her complex psyche. One former Smith friend, Janet Rosenberg, whom Plath met at the library stacks, nicknamed her ‘Silver Plate’, an allusion to how unreal many people found her. Many of the women were also aware that there was every chance, on becoming famous, that they might end up featuring in a future Plath novel, poem or short story. One friend, Jane Anderson, from Plath’s home town and also an attendee at Smith College, experienced a severe mental illness and was a resident of the same psychiatric hospital as Plath at the same time. These two women followed in each other’s footsteps remarkably. Plath featured Anderson as a character in ‘The Bell Jar’ in the psychiatric hospital sections as ‘Joan Gilling’, with the ‘gleaming tombstone teeth’ (a great but cruel description, especially if you look at the photo of her in Wilson’s book). Wilson calls this sort of characterization ‘imaginative vampirism.’ Apart from many references to female friends, it is the predominance of male admirers that catches your attention and captures your imagination. One of these is Eddie Cohen, a pen friend who wrote hundreds of reciprocated letters to Plath throughout the late 40’s and some of the 1950’s. Wilson calls him ‘fantasy boyfriend’ and ‘sex counsellor.’ The photograph of Cohen depicts him as every bit the ladies’ man, reclining in a James Dean-like white t-shirt and jeans against a classic car, hands on hips wearing cool sunglasses, with a cheeky smile.
Cohen was a graduate student from Chicago who deeply admired a short story Plath had published in ‘Seventeen’ magazine. He discovered a unique talent and probably recognized an enticingly complicated and complex mind. Their letters to each other became very personal and Plath clearly enjoyed being fully open with Cohen over a range of subjects, including philosophy and the art of lovemaking, so much so that Wilson says  Plath’s letters became ‘a kind of alternative journal.’ Cohen, it seems, was able to develop a complex understanding of Plath’s problems and insecurities. He fell in love with her over the course of a long series of letter writings. Cohen made an unfortunate error, however, as many people in this situation have done in the past. He decided, ‘on a whim’ in 1951 to take a long car journey to surprise Plath at Smith. Cohen took Plath on the three hour drive to her home in Massachusetts, with Plath edgy and nervous, Cohen timid and shy, and the whole trip a disaster, with Plath going up to her room upon arrival forcing Cohen to quickly depart after briefly meeting her mother. The full scale honesty and openness of the letters exchanged must have made it an intimidating encounter, best left alone as a two-dimensional relationship. Later Plath would request that he return all her letters to her. Showing fair judgement, his reluctance to do so was partly based on the monetary return he would glean from being the custodian of a famous writer’s correspondence.


There are many, many other fascinating encounters and anecdotes in this thoroughly researched book. I have spent so much time in general on Sylvia Plath that I hope it has once and for all quenched my thirst of knowledge for her. It is true there are many off putting aspects of her personality on show. At my age, this level of self -analysis and self -indulgence in others can be a bit nauseating. I often felt like saying to her ‘think about somebody else, not just an obsession with you for a change.’


‘The Bell Jar’ chapters are fascinating simply because of the strong correlation between fiction and real life, save for the odd substitution of person and place name.  The ‘Amazon’ hotel in ‘The Bell Jar’ in real life is the ‘Barbizon’ in New York, and at the ‘Ladies’ Day’ luncheon in the novel, Esther (Plath) eats a whole bowl of caviar, just as a ravenous Plath did in real life not long after arriving as a guest editor for a women’s magazine. Wilson’s book painstakingly details the well known facts of Plath’s serious breakdown and suicide attempt in 1953, after arriving back home after her volatile time in New York. Much of this is depicted famously in ‘The Bell Jar’, and it seems that much of what appears in ‘The Bell Jar’ is fascinatingly accurate. This includes Plath’s convalescences in mental hospitals and experiences with ECT, as well as her so called ‘recovery’, the subject of the brilliant ending in the novel- “patched, retreaded and approved for the road.” I place ‘recovery’ in inverted commas because, within seven or eight years of this tumultuous period, Plath will be dead, at the age of 30, by her own hand.


Shortly after this period Plath found herself involved in two very important pre-Hughes relationships. One was with the apparently brilliant Richard Sassoon, typically from Yale, who, Wilson notes, was able to ‘liberate her sexually.’ Sassoon was a distant relative of the famous war poet, and provided an incredibly rich intellectual tapestry for Plath just when she needed it. He, in turn, was drawn to her for a number of reasons, including her own intellectual capacity. By this stage Plath, in her early twenties, had written some highly successful poems and short stories. Later on, not long before Plath embarked on her literary career in England by winning a Fulbright Scholarship, Sassoon and Plath had a serious fallout. There would be further occasions they would spend together- notably in Paris after having already started her life at Newnham College, Cambridge, and in the south of France. Here Sassoon and Plath visited the Matisse Chapel and a damaging argument occurred after they found the Chapel unexpectedly closed. Plath eventually finished the relationship months later when she wrote to him to tell him that she was married to Ted Hughes, some four months after they met at a Cambridge party. The other important relationship pre-Hughes was with a man Plath was ‘unofficially engaged to’ back in 1954. Gordon Lameyer was an English student at Amherst College who introduced himself to Plath in 1953. Wilson writes about a lovely encounter between the two of them that took place in August 1954. At her home, with her mother absent, they took their relationship to a new level and consequently Plath thought she might be pregnant. Lameyer, before he discovered it was a false alarm, promised he would marry her. Lameyer generously describes the subsequent atrophy of their relationship as a situation in which ‘our orbits were out of phase.’ During the height of their passion they read books by J D Salinger and Carson McCullers together. You can sense the influence of these two great writers on Plath. Plath got in contact again with Lameyer when she was seriously dating Sassoon near the beginning of 1955. However their relationship well and truly ended after a European holiday together a year later in 1956 when Plath had not just Richard Sassoon in her sights, but also Ted Hughes whom she had just met. She chose the latter. By this time Plath was living and writing in Cambridge, and this is where Wilson’s book ends. The best thing about Gordon Lameyer, for the Plath lover, is the beautiful colour photos he took of her during their time together. For me, these are newly discovered ones, and she looks happy and radiant in most of them, especially the ones in 1954 when she bleached her hair after a fascination with Marilyn Monroe.


Plath emerges throughout as a wonderfully complex and interesting personality, but at the same time self-absorbed, ruthless and aggressively ambitious. A number of her female contemporaries considered her nothing more than a bitch. Perhaps, in some cases, this can be seen as mere jealousy as none of the equally ambitious young people about her ever reached the same heights in terms of fame and respect that Plath achieved. Posted by darren harrison at 2:03 AM

“Piece by piece, I fed my wardrobe to the night wind, and flutteringly, like a loved one’s ashes, the gray scraps were ferried off, to settle here, there, exactly where I would never know, in the dark heart of New York.”

Thank you for your photo of the Barbizon, it puts a picture on the sentence I always remember The Belljar by. MB

Thanks Martin- SP and TH still beguile me to this day, I'm not sure why. Not sure if you have seen the new Collected Letters Vol 1 and Vol 2- which are really worth reading. Would love to go to NY one day and vist the Barbizon! But it is a long way away.