I HAVE been watching quite a lot of ‘GET SMART’ lately, for old time’s sake. And it has dated quite a bit, as you might expect, and the jokes are repetitive-

‘Have you got all that Max?’

‘Which bit do you want me to go over?’

‘The bit after you say ‘now listen carefully, Max.’ 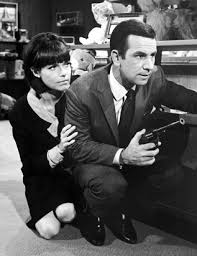 At least it’s clever humour, and clever in how ridiculous it is, and unpretentious, and full of odd ball, loveable characters like Larabee and Siegfried. Watch ‘From Russia With Love’ again and it makes ‘Get Smart’ even funnier. Sean Connery’s little quips are nowhere near as good. There’s even a ‘Get Smart’ episode called ‘Dr Yes.’

As a contrast I saw a new French comedy last night, at the Westgarth, in Northcote. It is called ‘The Intouchables.’ It is about an unemployed young black man named Driss (Omar Sy), who lives in a poor part of Paris, seemingly headed for a life of drugs and crime, with nothing really going for him except for his humour, brazenness, creativity and entrepreneurial skills (in other words, loads), all of which offer him a chance to avoid his bleak future. He gets the unlikely job of being a full time carer for a fabulously wealthy, highly cultured older white man Philippe (Francois Cluzet), who deeply loves his music and art. As a full time carer, Driss occupies the accompanying room of a highly ornate mansion. There is any number of jokes about how uncomfortable Driss is about looking after his patient, who needs a lot of looking after, as he is paralysed from the neck to his toes after a hang gliding accident. The classic odd couple warm toward each other fairly quickly, and throughout the course of the film Driss deeply enriches Philippe’s life by helping him rediscover a sense of fun, adventure, and even romance, after it seemed that music and literature and art were all that were left for him to enjoy. And of course, in learning how to look after someone else, and living in such fertile circumstances, the black carer has his life enormously enriched as well.

The premise of the film is lovely. And I can see how attractive Driss is to Philippe- he is funny, irreverent, and above all doesn’t take pity on him, and even refreshingly makes lots of jokes about being crippled, incapable, and so on. A scene that takes place at the opera, in which Driss laughs uproariously at the singing and costume of the actor below him on the stage is funny. It’s send up of the earnestness of the rich and the theatre crowd in general reminded me of the Marx Brothers irreverent humour and their wonderful digs at the Establishment.

However I became tired of the predictability of the whole thing after a while. There were the same sorts of jokes all the time, with Driss trying very hard and slightly grating on me towards the end, when other sections of the crowd were warming more and more to him. It was the clumsy and half-hearted attempt to build pathos into the film that irked me as well. There was a ‘serious’ sub-plot about Driss’ family lurking in the background. I felt that the scriptwriter’s weren’t sure what to do with it. Perhaps they felt the film needed something else, which it probably did, but it wasn’t dealt with well. And I didn’t believe for a second in the romantic past of the white man either.

Everybody seems to love this film. But for me it’s too sugary and sweet. I have never gone for crowd pleasers. Much prefer the murkiness of a Mike Leigh film. Every single frame seems hell bent on trying to extract a smile from its audience. And of course, as it seems to be saying, black people are funny and beautiful, even those from the Parisian wrong side of the tracks. Well, I kind of know that already, but of course they’re not all cute, funny and loveable. And wealthy white cripples can be grumpy and full of self-importance. But you know what? Underneath it all, if given the chance, they really do have the capacity to be fun loving rascals. Well, now I know.

Posted by darren harrison at 2:40 PM