I AM immediately drawn to the name ‘Sokurov’ as I glance over the Melbourne International Film Festival guide in The Age. It all began at an earlier MIFF occasion- ‘Mother and Son’- going by, admittedly, a heartfelt recommendation by Nick Cave that was originally published in ‘The Independent on Sunday’:
'A FRIEND of mine invited me to attend an advance screen of a Russian film in Soho. I asked him what it was like and he said, "Well, nothing really happens and then someone dies. Come along. You'll love it." My friend was releasing the film in this country, so I felt obliged. Sitting through a Russian film is the kind of thing friends do for each other.

I arrived late and made my way to the front row just as the opening credits were ending. Ten minutes in, I started quietly crying and continued to do so for the 73-minute duration of the film. Now, I've cried in films before but I can't remember crying quite so hard, without pause, all the way through. When the film ended and the lights came on, a red-eyed woman sitting behind me pushed a Kleenex in my direction and asked me if I would write something about it for one of the newspapers.
The film is called Mother and Son, and is directed by Aleksandr Sokurov. It explores the final day in the life of a dying mother (Gudrun Geyer) and her adult son (Alexei Anaishnov). It is morning. The mother wants the son to take her for a "walk", which involves carrying her through a series of dreamlike landscapes, whereupon he returns to their bare, isolated home, feeds her, and puts her to bed. The son then leaves the house to walk on his own and returns to find that she has died. All this takes 76 minutes. But what we witness in that time is a thing of such beauty, such sadness, that to cry, for me, was the only adequate response.It was a profound experience.'


Such a simple story of a love a son has for his dying mother. He carries her across stunning landscapes that are filmed with some sort of a distorted – known as anamorphic- lens, inspired by the craftsmanship of Caspar David Friedrich. She is lovingly cradled in his arms like the Pieta, and their image appears at the bottom of the screen, at the bottom of a path that reaches upwards along a kind of valley. It takes some time for the distant figures to reach the top of the screen, hence the top of the mountain. It reminds me of Van Gogh’s appreciation of the Christina Rossetti poem:

‘Does the road go uphill all the way?’


‘And does the journey take all day?’

Thankfully, Sokurov has all the patience in the world as we celebrate the moving and beautiful portrait of this son’s love for his mother. There is very little need for dialogue. Dialogue would spoil the mood. There are insects, however, and the final inevitable release. The emotions for the mother are palpable.  It is no less tense, but far less complex, than Paul Morel’s love for Gertrude Morel in Lawrence’s ‘Sons and Lovers.’ Like Gertrude Morel, this Russian man’s mother dies too, but much more quietly and peacefully, accepting the inevitability of death. Her son has taken his mother on her final journey, so there must be a sense of relief for him, too.


Another MIFF brought us “The Sun’, about Emperor Hirohito, and the enormous sense of expectation on his shoulders as Japan’s role in the Second World War becomes increasingly complex and the war is ending. Hirohito is in a bunker underneath Tokyo. He is fascinated with marine life and in an extraordinary sequence marvels over a specimen crab. Equally interesting is his vision of flying fish as airplanes in the sky.  It is a very personal piece which examines Hirohito’s conscience and portrays him as a man who, although at odds temperamentally with General Macarthur, also in the film, is able to share dinner and a cigar with him. Hirohito seems timid and child-like, against the brash American. The American press corps take delight in photographing this strange, elusive man, which is the funniest moment in the film.

I saw ‘Russian Ark’ at the old Lumiere cinema in Exhibition Street. A stunning technical achievement, the camera and the film’s narrators wander through a multitude of rooms inside the Winter Place, recreating a tapestry of historical events, all done without any digital editing, in a single sequence. The scene in which the ghostly figure of the eccentric narrator pauses in front of Rembrandt’s ‘Return of the Prodigal Son’ is a personal favourite. Each room seems to represent a different historical period, including the time of Peter the Great, Catherine the Great and the frightening world of Josef Stalin. The location is beautiful, as are the costumes and paintings. A long sequence of an orchestra being filmed is slow and seductive, and the large number of inhabitants inside the Winter Palace, drift out the exit and into the cold air during the closure of the film.

‘Father and Son’ was played as a one off at the Nova in Carlton, as part of a Russian Film Festival called, I think, ‘Russian Resurrection.’  The beauty and honesty and tenderness of a parent and a sibling is quite different here. I would love to see the film again. I remember a lot of shots on a rooftop somewhere in Russia, and some stained glass. Like some of his other films, there isn’t a lot of action. It is mostly meditative. The experience was almost as equally moving as the tenderness in ‘Mother and Son.’ This time it is like the touch between father and son in Rembrandt’s ‘The Return of the Prodigal Son’, except there is a homo-erotic element which I find fascinating. Their embraces are vigorous and warm and sometimes vaguely sexual.

‘Which takes me to ‘Faust’, which is based on Goethe’s version, not the Marlowe that I taught at Newent Community College in Gloucestershire, which is the one I am familiar with. The film went for over two hours, but it went by very quickly, and tired as I was, I concentrated on every frame, marvelling at the lighting, the depiction of a previous time, the ancient villages and rugged landscapes. Faust is impoverished and unfulfilled and desperate to know the secrets of the soul. He meets a bizarre Mephistopholean figure, who has a body that is more bestial than human, with a penis attached from behind rather than at front. Faust makes his pact, written in his blood, and finds himself unwittingly wearing armour in the loneliest and most desolate landscape imaginable. This, it seems, is his Hell- there is no way out and no food or water, not exactly the gates of Hell opening, as in the Marlowe, but devastating for him nevertheless.  I was hoping to see that horrific, doomed,  fiery opening. Faust gets his woman, the Gretchen, in this film called Margarete. She is pale and innocent looking, porcelain and quite beautiful, and rural looking. Faust is obviously desperate for his moment in time with her. When it comes it is surprisingly understated, rather than being lustful or overtly sexual. Faust does pore over her naked body but it is sensitively done. Sokurov uses the most intense close-ups I have ever seen, and her pale face and reddish hair lights up the screen in this incredible yellow glow. All else is dark. The heads of other members of the audience are lit up as well. Sokurov revisits the anamorphic lens, reminiscent of ‘Mother and Son’ again, but this time inconsistently, as if he wants to try it for a certain effect in some shots only. I read somewhere that the painterly influence is someone other than Casper David Friedrich this time- someone I don’t know called David Teniers, a Flemish painter, and a landscape painter from the same period known as Herri met de Bles. It is the latter that is the more obvious-  I have looked at these pictures and I can see the striking resemblance.

The influence of a painter on a director and cinematographer is a fantastic thing. Ingmar Bergman admired Edvard Munch. I might be wrong, but I thought I could see Munch’s influence when I saw Bergman’s ‘Cries and Whispers.’ It is the stilted figures, the sisters, like in the sad, raw Munch pictures that show his grieving family. 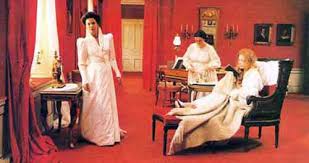 The vision of Hell in Sokurov’s ‘Faust’ reminds me a lot of the vision Shakespeare created for the musing Claudio, facing execution,  in ‘Measure For Measure:

‘‘…to bathe in fiery floods, or to reside
In thrilling regions of thick-ribbed ice;
To be imprisoned in the viewless winds,
And blown with restless violence round about
The pendant world.’

Posted by darren harrison at 4:02 AM