ENGLAND, ENGLAND MY ENGLAND- CONTEMPLATING THE NORTH- CAN YOU FEEL THE SILENCE?


OK. The first three words of the title are a bit clichéd. But I like it because of the Lawrence reference, and also because it seems to sum up my feelings tonight, as I pore over a map of England and think about ten years ago, around the time we made the fateful and fatal decision to pack up and leave. And come home. Back to Australia. I think of King Lear, poring over his own map, readying himself to divide up his kingdom amongst his three daughters and three new son-in-laws. But my reasoning is different to his-  unlike Lear, I don’t have a ‘darker purpose’- I merely wish to wallow in my beautiful memories of a decade ago.

At this time, ten years ago, we were living in Gloucestershire, the market town of Newent, specifically. I remember I had been teaching at a soul destroying school in the north in a former mining town called Mansfield. I only barely survived, getting through with the help of the spectacular car journey every morning and afternoon: the beautiful green of the English wintry countryside, watching birds settle on ancient fence posts, old cottage-sized post offices in little towns with grand red pillar boxes, waving to anonymous school kids on the side of gravel roads, the air distinctly cool and fresh, and above all Nick Cave belting out songs like ‘Fifteen Feet of Pure White Snow’ and ‘The Sorrowful Wife’, released just a year earlier on ‘No More Shall We Part.’

I saw the advertisement for Newent Community College somewhere, and as a good omen knew people in the gorgeous nearby town, Ross-on-Wye, near Wales, and drove down for an interview. There were a number of those old black and white timber buildings in the town, very seductive for people like me from new Australia, including the fish ‘n’ chip shop built in 1493. I got the job, which is why, ten years ago I was living in Newent, Gloucestershire, weighing up whether or not to come home or move, after two and a half years, to another spot somewhere else in England. If we stayed, Yorkshire was a distinct possibility. We had been to the north, but only stayed for a period of time as high up as Lawrence country, in the Midlands. Then there was the pull of home, and the family, and my old job, and Penny, the family cat. Oh, and my books, and ordinary life, and the feel of being more settled. Of course we could have stayed in England and eventually feel settled as well… but we didn’t. We came home in December, 2003. 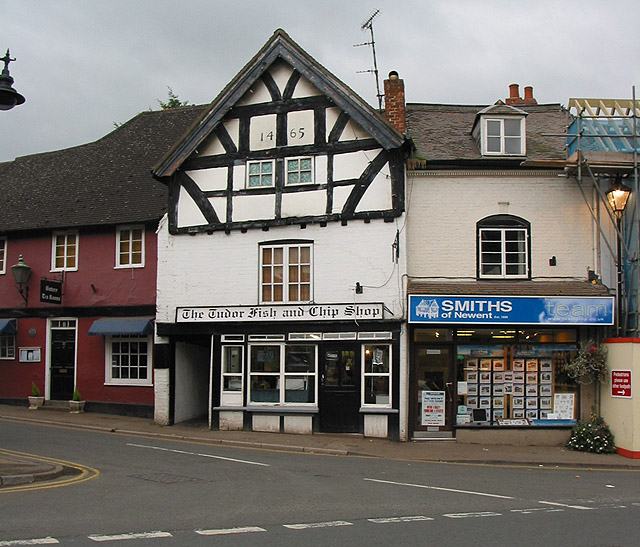 As I pore over this map of England, I fantasise about living there again, and contemplate all the treasures that England beholds. At the same time I try to remember in my blinded idealism and rose coloured glasses that there are horrors in the UK that one can’t help but being glad to have escaped. The pernicious royal family is one, and the revolting pomp and ceremony of the ridiculously looking and ridiculously named ‘Beefeaters’, the sickening talk all the time of Viscounts and Barons and Lords, the Duke of Buckley and the Duchess of Kent, the vomit inducing National Anthem that they tried to force all of us to sing in Melbourne way back when…


Despite all of this, how I wish I was there!

The top right hand side of my map is an area just below Scotland, encompassing the moderate sized county of Northumberland. It is chiefly known for its castles. It is a place I could easily spend the rest of my life. We visited the castles that Turner painted long ago, crumbling then and still crumbling further, but such a great part of the Romantic landscape- Dunstanburgh, Alnwick, Bamburgh. And there’s Norham Castle, fixed in my memory as the subject of a majestic Turner painting of yellow and blue housed at the Tate Gallery.
I recall a tourist page that had a picture of the one of the world’s most beautiful birds, the Puffin. Alas, we didn’t see any. But we did go to the Holy Island of Lindisfarne. You have to be careful to remember to go back to the mainland before the tide comes in or you are stuck. Holy Island, if I recall correctly, features in the novel ‘Border Crossing’ by Pat Barker. It is her territory. The accents are beautiful in this part of England, which could easily have been Scotland. I imagine they feel a little bit separate to the English. I saw an old book called ‘The History of Northumberland.’ I remember thinking how lovely it would be to live here and read this book in the conservatory of the house I am living in one day.


Directly below my map is the county of Durham, featuring a University and one of many counties that boast a glorious Cathedral, although not my favourite in England. The counties just south and west of Durham interest me a lot more. What could be more impressive than Cumbria? ( formerly known as Westmoreland, from memory).  It is the glorious setting for Wordsworth’s moving ‘Prelude’ and it is the location for Lizzie’s trip with the Gardiner’s in ‘Pride and Prejudice’- “what are men to rocks and mountains?”  I don’t even know if there is a school in Cumbria. Of course there must be, but when I think of Cumbria I think of Lizzie’s rocks and mountains, and famous lakes, everything remote to work or working. It was when he was touring the lakes that Lawrence learnt of the end of the First World War. It strikes me as a great place to find out a war has ended. I could live in Cumbria, but every day I would be pinching myself. The thought is just too surreal. I could enjoy Van Morrison’s song ‘Summertime in England’, all Wordsworth and Coleridge, even more because it is set here, in Kendal. It is one of two songs that contain my favourite lyric in music: ‘Can you feel the silence?’


Yorkshire is next on the map, and in my mind a more realistic option. This is because it is where we were going next, if we didn’t come home. The Bronte’s resided there. We went to the Bronte Parsonage in Haworth countless times, just like Sylvia Plath, and saw the little green sofa that Emily supposedly died on, on December 19, 1848. Yorkshire also features the majestic Castle Howard of ‘Brideshead Revisited’ fame, and Scarborough, where Ann Bronte is buried in a last ditch effort to save her life by the raging waters. The school in which there may or may not have been a vacancy- I can’t remember- was called ‘Skipton Girls’ High School’ in Skipton, North Yorkshire. This is where I fancied working throughout 2003 and beyond. A tranquil life of teaching Literature to enthusiastic English girls, and living on a little farm with some goats and sheep. We would have one of those ancient fences around our property that are characteristic of the area. They are made of blocks of blue stone that are piled up randomly and have been there for centuries. Someone in the UK said that Yorkshire is ‘God’ Own Country’, and I’ve heard it said about other places as well, but in the case of Yorkshire I can almost believe it.

Of course there is another important literary legacy in Yorkshire- it is where Ted Hughes comes from, his parent’s farm called 'The Beacon' in a town called Mytholmroyd, with poor Sylvia Plath  buried quite close by, in Heptonstall. We visited the pub they used to go to, 'The White Lion' and I sat, like countless others before me, astride the gravestone with the memorable epitaph: ‘Even amidst fierce flames the golden lotus can be planted.’ If you know anything of her, you will know why the ‘fierce flames’ and ‘golden lotus’ are absolutely perfect. The north of England is a beautiful part of the world. But it is just one of many options I would gladly take up if I could live in England. I’m putting my map away to become enticed with other places in England, another time.
Posted by darren harrison at 1:18 AM