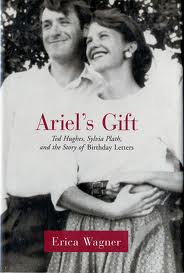 ERICA Wagner has written a fascinating book of analysis about a fascinating topic. It is a study of the poems that Ted Hughes published near the end of his life, about the time he met Sylvia Plath in 1956 in Cambridge, until the years of recrimination and grief following her suicide in 1963. I guess a lot of people in the literary world wondered about Hughes’ thoughts on this turbulent period of his life, and ‘Birthday Letters’ reveals what a huge emotional impact Sylvia Plath had on him, despite the fact that they only knew each other for eight years of their life. 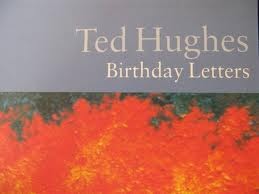 ‘Birthday Letters’, in relation to the Hughes/ Plath relationship, covers topics like their initial meeting; their wedding in London; their honeymoon in Spain; their travels to the US and places like the Badlands, Cape Cod and studying at Yaddo; visits to Yorkshire to meet Hughes’ family and places like the setting for ‘Wuthering Heights’; having works published (Hughes much more successful here); living in Devon; their obsessions with the occult and mythology; the birth of their two children; working in universities; being full time writers; living in London; Hughes’ extra marital affair and eventual disintegration of their marriage; Plath’s enormous battles with depression and the impact of her father’s death; Plath’s suicide in Primrose Hill and the beginning of the recriminations.

Wagner discusses virtually all of the 88 poems Hughes published in 1988, the year of his death. She makes the point that, unlike his former wife, Hughes was not a confessional poet, but was rather intensely private, and preferred to look to subjects like anthropology and mythology as subjects for his poems. And furthermore, Hughes would never discuss his life with Plath, or his subsequent ill-fated relationship with Assia Wevill, the woman Hughes replaced Plath with, who also tragically committed suicide. It is surprising, therefore, that first of all Hughes suddenly published all these poems about Sylvia Plath in the first place, and secondly that they are so intensely personal by nature. Wagner calls ‘Birthday Letters’ ‘the artistic flowering of more than thirty years of pent-up emotion.’ 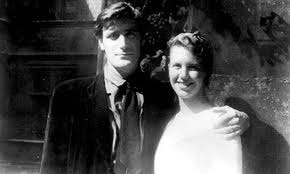 Plath and Hughes were married in Bloomsbury on Bloomsday, June 16, 1956. It was a very small affair, with her mother in attendance, but none of his family. Writing to her brother, Warren, she tells him that she wore ‘a pink knitted suit dress’ supplied by her mother, and that the tears fell ‘down from my eyes like rain’, she was so happy. Hughes’ take on things was darker, probably due to hindsight. He says his wife’s eyes were ‘like big jewels/ Shaken in a dice-cup and held up to me’- a hint of chance or fate- and the precarious idea of fate is brought up again by Hughes in an encounter Plath also wrote about concerning her fear that she missed her husband in London when he was coming down from Yorkshire some months later, not on board a bus as she expected. Plath is ‘frantic’ and begs a taxi driver to drive her quickly to King’s Cross Station in the hope he is there, yelling through the streets of London. When Plath encounters him, she writes ‘He looked like the most beautiful dear person in the world; everything began to shine, and the taxi driver sprouted wings, and all was fine.’

This is just one example where we see the fascinating correlation with the mind of Hughes. Based on the same encounter, in ‘Fate Playing’, Hughes writes:

‘I saw that surge and agitation, a figure

Breasting the flow of released passengers,

And your exclamations, your flinging arms

As if I had come back from the dead

Against every possibility, against

Every negative but your own prayer

To your own gods.’

Wagner recognizes the ‘dangerous violence’ in the ‘molten face and eyes’, (reminiscent, incidentally, of words Lear uses when her discovers Cordelia after she has helped restore him on the ‘wheel of fire), and I see the desperation in the ‘Breasting the flow’ of the other passengers, which all adds up to a kind of maniacal extremity in Plath which would have made it challenging for Hughes to deal with. We see these extremities of feelings time and time again in these poems, and there are also references to it in Plath’s own words, in both her letters to her mother as well as her journals. In particular it occurs when Plath either succeeds, or fails, at her own writing, often measured misleadingly by whether or not her poems or stories were accepted for publication. Here is the desperation registered again by Hughes in ‘Fever’ whilst on honeymoon in Spain:

‘Your cry jammed so hard

Over into the red of catastrophe

Left no space for worst.’

This ‘catastrophe’ is the result of a bug, or food poisoning.

Sometimes Hughes and Plath have extraordinarily differing reactions to everyday occurrences in their lives. Prior to Spain they visited Paris, and Plath, according to Hughes’s account in ‘Your Paris’, was typically enraptured by the romance of the city, its streets evoking ‘Impressionist paintings’ and exiled writers like Fitzgerald, Miller and Hemingway. Hughes, however, has a different perception of things, and in just-post-war-time Paris, can’t keep more sordid images out of his head:

‘I heard the contrabasso counterpoint

In my dog-nosed pondering analysis

Of café chairs where the SS mannequins

Had performed their tableaux vivants

So recently the coffee was still bitter

As acorns, and the waiters’ eyes 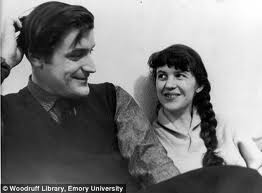 A couple of years later, in the summer of 1958, sees Plath and Hughes in ‘Child’s Park’ encountering girls taking flowers from rhododendron bushes, and Hughes’ image is of girls who ‘were so happy, rending the branches/ Embracing their daring bouquets’, and other such lovely carefree images of benign, happy behaviour. Plath, and this time it is not just Hughes’ take on it, but her own writing in her journal, writes with a thrilling but scary and deadly violence:

‘These girls were ripping up whole bushes- that crudeness and wholesale selfishness disgusted and angered me. I have a violence in me that is hot as death-blood. I can kill myself or- I know it now- even kill another. I could kill a woman, or wound a man. I think I could. I gritted to control my hands, but had a flash of bloody stars in my head as I stared that sassy girl down, and a blood-longing to (rush) at her and tear her to bloody beating bits.’

It seems barely worth pointing out that this is as close to a violent act as you can get, and the innate fury strongly comes across in the alliterative ‘bloody beating bits.’ And yet, it seems silly, and child-like at the same time it is shocking and disturbing.

Wagner, through Hughes’ poems, chronicles unfortunate domestic situations as well. According to Hughes, one day in 1960, where they are both living near Primrose Hill, he has misjudged the time: ‘..demented by me being/ Twenty minutes late for baby-minding’, she subsequently smashes his mother’s ‘heirloom sideboard-/ Mapped with the scars of my whole life.’ There are pages and pages of Plath’s unbridled fury, which charts a tragic decline of her mental state, dealing with her own personal demons. Hughes’ reaction to Plath’s violence receives an unexpected reaction:

Smash it into kindling.

That’s the stuff you’re keeping out of your poems!’

She would, arguably, finally fulfil Hughes’ desires by writing the poems for Ariel towards the end of her life. If Hughes copped a smashed sideboard for being late for baby-sitting, the response is arguably worse for suspected adultery (with a producer from the BBC)- the ripping out of pages from his treasured edition of Shakespeare’s works. Wagner says Plath ‘saw rivals for Hughes’ affection everywhere, anxiously possessive.’

Some of the best parts of ‘Ariel’s Gift’ take place when Wagner matches up both Hughes and Plath’s differing perspectives on the same encounter, as with the example of the child’s park earlier. Whilst living in Devon Hughes took advantage of the opportunity of engaging in an ancient country custom- rabbit catching. Plath apparently tore up the snares that would catch the rabbits. She is coldly accusing: ‘How they awaited him, those little deaths! / They waited like sweethearts. They excited him.’ In Hughes’ poem, the perception is ‘You saw baby-eyed/ Strangled innocents, I saw sacred/ Ancient custom. At the time Hughes was unable to understand Plath’s fury- she was, according to him, ‘weeping with a rage/ That cared nothing for rabbits.’ It is only now, on reflection, he understands the trigger to be the catastrophic event which took place that same weekend- the arrival of Hughes fellow adulterer, Assia Wevill, and her partner David, coming for a short stay. 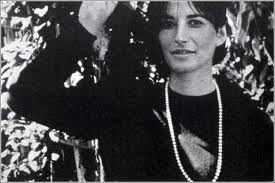 Plath evidently forced the situation with Hughes towards the end of 1962. She told her mother she didn’t want to see her again until she had found a better equilibrium in her life. She went to London with her children, renting, as it turned out, for the final few months of her life in Fitzroy road, near Primrose Hill. The house, once lived in by W B Yeats, is around the corner more or less from the house she rented with Hughes before they left for Devon, the house that Wevill and her partner subsequently took on.

The poems written post Plath’s suicide in the cold, cold winter of 1963, feature a ‘decided shift’ in tone and become more abstract. Some of them deal with the difficult role played out by Hughes as literary executor. Others reflect on the powerful forces that contributed to Plath being what she was- suicidal. A large number of Hughes’ poems deal one way or another with Plath’s father, who, as it is widely known, died prematurely when she was only eight. Plath’s portrayal of her mother in ‘The Bell Jar’ is shockingly harsh, just as harsh in a journal entry where she imagines killing her-‘what a luxury it would be to kill her, to strangle her skinny veined throat which could never be big enough to protect me from the world.’ These poems of Hughes centre largely on the many controversies surrounding the years after Plath’s death, dealing with the spectre of her sudden posthumous fame and the books about her that slowly emerged. The title of the poem ‘The Dogs Are Eating Your Mother’ says it all. These poems are about ‘the wars that began to be waged around the memory of Plath after her death’ with friends of Plath and of Hughes ‘lined up on opposing sides of the battleground.’

The final section of ‘Birthday Letters’ reminds us that after Plath’s death, Hughes’ new role was the bringing up of the two small children, Frieda and Nicholas (Nicholas himself tragically suicided some time after his father’s death). These are tender poems about children who have suddenly lost their mother and have to cope. In the aptly named Life After Death’, Hughes writes of feeding his youngest child and says his son’s mouth ‘betrayed you –it accepted/ The spoon in my disembodied hand/ That reached through from the life that had survived you.’ 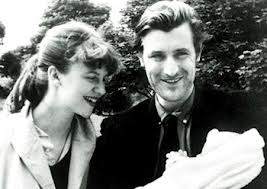 Posted by darren harrison at 5:12 PM

It was a fascinating story. I fell in love with the whole thing.

That is great to know.