OUR new digs are not going terribly well. We all feel a bit dislocated and would like to return to our waterlogged home as soon as it is fully ready, which seems to be taking some time.

We have a dishwasher that is unpredictable and washes some things clean, but leaves some things mysteriously mucky and greasy. It also makes incessant groaning sounds. The stove is a problem. The hotplate seems to get hot reasonably efficiently but the heat somehow fades and then some things are ready for dinner on time and others aren’t.

The water in the shower is a bit passive, and although it’s not exactly coming in drips, it isn’t a torrent either, and would please nobody, with the possible exception of the Australian Conservation Foundation.


The kitchen table is firm and sturdy, however there is a plate of glass on top, and sometimes water gets under the glass which makes it messy and difficult to clean.

It’s good, some might say, to have three television sets, and even better, some might say, to have Foxtel, however the ‘movie channel’ isn’t operative and we can only access Foxsports 1, 2, 3. To the uninitiated, this is the difference between watching regular games of AFL football with robust football discussion programmes, and watching boring rugby league matches, insignificant golf tournaments, and darts.

There are not enough plates to go around if we have visitors, and the bowls are too shallow. The frying pan seems to have been scrubbed with sharp fibres in the past, and there are only two saucepans. The plastic tongs have lost their spring, the coffee plunger leaks and offers only watery coffee, and the amount of available and necessary bench space is a sick joke. 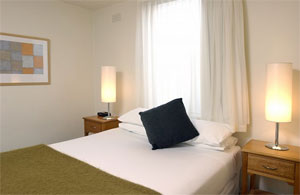 The beds are too soft, sinking in the middle, and the sheets are too thin and cold. The trams shriek and clang as they go by outside during the night and the walls are so thin that normal children’s voices carry all the way along the corridor to the lifts. The lifts, by the way, are a problem because you can’t access other floors unless you swipe a little plastic card, which you invariably forget.

Apart from all of that, one could say the temporary digs are satisfactory for a small amount of time, but obviously not ideal for extended stays. It is difficult enough for two adults- add two small children into the mix and it’s a nightmare.

Posted by darren harrison at 11:44 PM

Is there a picture of John Coleman in the bar?
http://en.wikipedia.org/wiki/John_Coleman_%28Australian_footballer%29