Artistically, Lawrence and Joyce were very different. By the beginning of the 1920’s Lawrence was working on his posthumously published novel, ‘Mr Noon’, in which, apparently influenced by Henry Fielding, Lawrence experimented with the creation of a relationship between the author and the reader. There are innumerable examples of this comic interplay (later to be cultivated by Nabokov in ‘Lolita’), for example in ‘Ah, dear reader, you don’t need me to tell you how to sip love with a spoon…’, and ‘…such as you have taken, gentle reader, you who sit in your comfortable home with this book on your knee’, and even ‘And so, gentle reader-! But why the devil should I always gentle-reader you…’.

‘Kangaroo’ in some ways continued this experimentation with style. Written in NSW at breakneck speed in the middle of 1922 (the first manuscript version only took about 40 days), it included in chapter VIII a long factual article about earthquakes, in a chapter called ‘Bits’ a series of items culled from the Australian newspaper, ‘The Bulletin’, chapter XV begins ‘Chapter follows chapter, and nothing doing’, then a little summary of the action thus far follows. 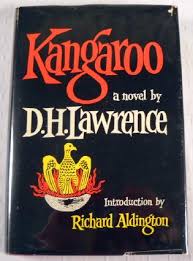 Lawrence seems to have enjoyed his novel’s little eccentricities. In a letter to a close friend, the Russian émigré, Koteliansky, Lawrence says in regards to his new novel, ‘Kangaroo’, ‘…but such a novel! Even the Ulysseans will spit at it.’ ‘Ulysses’ had just been published, in Paris in 1922, and Lawrence had heard the rumours about how unconventional it was.

Joyce’s experiment was considerably ground breaking, and dwarfed Lawrence’s radicalism by a considerable margin. Joyce’s short stories ‘Dubliners’, which put Dublin on the literary map, was a personal response to his childhood and adolescence growing up in the big Irish capital city. And Dublin never escaped from Joyce’s consciousness, even if Joyce famously physically did. Likewise, ‘Sons and Lovers’ is an autobiographical account (of sorts) of Lawrence’s boyhood and adolescence, his time spent in the more semi-rural Eastwood near Nottingham. And as with Joyce and Dublin, Eastwood and its environs never left Lawrence either. As late as 1928 and 1929 Lawrence was still reminiscing about Nottingham in his novels ‘Lady Chatterley’s Lover’ and ‘The Virgin and the Gypsy.’

However, ‘Ulysses’ was something else again. A clue as to how the two unconventional authors went about things differently can be found in the length of gestation of both novels. ‘Kangaroo’ was written in just six weeks. ‘Ulysses’ would be written over almost a ten year period. 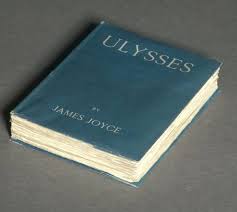 Lawrence, on reading ‘Ulysses’, was in for a shock. ‘Ulysses’ is written in what has become known as a ‘stream-of-consciousness style’, full of experimental prose- puns, parodies, allusions, and symbols abound. Punctuation seems to have been throw out the window, and phrases from Latin, French, German and other languages appear seemingly at random. A number of new invented words appear just to make the text more difficult to read, and there is musical text and one chapter is in the form of a play, another section poetry. The following names appear for the members of a wedding, a precursor to the idea that Fitzgerald used a few years later when he named Gatsby’s party guests:

‘Finnegans Wake’ would take up a lot of Joyce’s creative energy once ‘Ulysses’ was published- many people say too much. Faber published different chapters of ‘Finnegans Wake’ along the way (known then as ‘Work in Progress’), however from ‘Ulysses’ in 1922, until ‘Finnegans Wake’ in 1939, besides poetry, this is all that Joyce published. And he would be dead within a year. 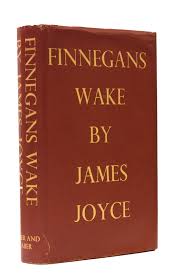 This final novel seems to be based on a whole range of different languages, complete with words and phrases that often contain several layers of meaning. It seems that the melody and rhythm of the words mean more than the actual words themselves, which demands excessively patient reading. Many have found the novel impossible to read- I remember Colm Toibin telling me that apparently a good knowledge of Hungarian helps matters- regardless, there are those then, and since, who claim it to be a masterpiece and well worth the extensive and painstaking time Joyce took to write it. Evidently it helps if you read it aloud. Still, there are not too many readers who would understand all the allusions and literary references, and religious connotations, and various teasing wordplays.

Interestingly both men experienced significant hurdles when it came to publishing their most important work. In Joyce’s case, England or America wouldn’t touch seminal works like ‘Dubliners’ and ‘Ulysses’ for fear of offending. ‘Dubliners’ was first sent to a publisher in 1905. The publisher prevaricated on the grounds that the subject matter might offend, after initially agreeing to publish. Finally, by 1914 the publisher- Richards- finally agreed to risk libel action and publish, by which time Joyce must have had enough. Lawrence had difficulty with ‘The Rainbow’, although contrastingly, his book was initially published and then banned, and ‘Women in Love’, and infamously ‘Lady Chatterley’s Lover’ have long, fascinating histories of banning and censorship. As a result pirated copies of some of these works flourished much to their author’s chagrin. Joyce had to go to Paris to get ‘Ulysses’ published, by Sylvia Beach (Virginia Woolf at the Hogarth Press declined). Lawrence tried Beach as well for ‘Lady Chatterley’s Lover’, and ended up settling for a Florentine called Orioli.

The best way to represent Joyce’s unique style is to quote from it- here is the first page of ‘Ulysses':

STATELY, PLUMP BUCK MULLIGAN CAME FROM THE STAIRHEAD, bearing a bowl of lather on which a mirror and a razor lay crossed. A yellow dressing gown, ungirdled, was sustained gently-behind him by the mild morning air. He held the bowl aloft and intoned:
-- Introibo ad altare Dei.
Halted, he peered down the dark winding stairs and called up coarsely:
-- Come up, Kinch. Come up, you fearful jesuit.
Solemnly he came forward and mounted the round gunrest. He faced about and blessed gravely thrice the tower, the surrounding country and the awaking mountains. Then, catching sight of Stephen Dedalus, he bent towards him and made rapid crosses in the air, gurgling in his throat and shaking his head. Stephen Dedalus, displeased and sleepy, leaned his arms on the top of the staircase and looked coldly at the shaking gurgling face that blessed him, equine in its length, and at the light untonsured hair, grained and hued like pale oak.
Buck Mulligan peeped an instant under the mirror and then covered the bowl smartly.
-- Back to barracks, he said sternly.
He added in a preacher's tone:
-- For this, O dearly beloved, is the genuine Christine: body and soul and blood and ouns. Slow music, please. Shut your eyes, gents. One moment. A little trouble about those white corpuscles. Silence, all.
He peered sideways up and gave a long low whistle of call, then paused awhile in rapt attention, his even white teeth glistening here and there with gold points. Chrysostomos. Two strong shrill whistles answered through the calm.
-- Thanks, old chap, he cried briskly. That will do nicely. Switch off the current, will you?


Then there is the first page of ‘Finnegans Wake':

riverrun, past Eve and Adam's, from swerve of shore to bend


of bay, brings us by a commodius vicus of recirculation back to

core rearrived from North Armorica on this side the scraggy

isthmus of Europe Minor to wielderfight his penisolate war: nor

to Laurens County's gorgios while they went doublin their mumper

kidscad buttended a bland old isaac: not yet, though all's fair in

on life down through all christian minstrelsy. The great fall of the

offwall entailed at such short notice the pftjschute of Finnegan,

erse solid man, that the humptyhillhead of humself prumptly sends

an unquiring one well to the west in quest of his tumptytumtoes:

and their upturnpikepointandplace is at the knock out in the park 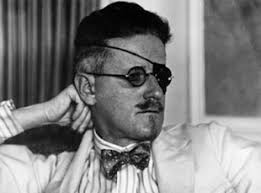 Posted by darren harrison at 1:10 AM