ON Father's Day we all went to Chinatown for yum cha. I've been wanting to have it for ages. When I was a teenager I went to a Chinese restaurant with mother, and it was a wonderful experience. All I remember is special flavoured dim sims and spring rolls and other curiosities. Not the best restaurant experience I've ever had- that would be in 1979 when, after seeing King Kong with a friend from school and his parents, I had spaghetti bolognaise for the first time in St Kilda. But a lovely memory nonetheless.

These days I take my children to 'The Spaghetti Tree' once a year. Hopefully they will grow up remembering our sweet times. I like the idea of a yearly ritual. We sit by the window and watch people and order the same thing, at the same table. The idea of everything being the same pleases me. The first time, as soon as we finished the meal- the second we put the fork down- my eldest daughter, who is still young, said nonchalantly 'can we go home now?!' 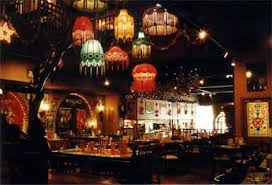 When I left school I went to a lot of restaurants. Our group either went to see a band, a film, or we went to a restaurant. It felt like a very adult, fun thing to do. I had meal after meal after meal of disappointing dishes. In fact, I garnered a reputation amongst my friends for ordering nasty dishes. Instead of saying ‘what’s your soup like, or what’s your meal like?’, they would say ‘how crap is your spaghetti?’, or ‘how crap is your steak?’ I remember at Mt Macedon once ordering pea soup. And that’s what I got. A bowl of watery liquid filled with thousands of little soft scungy green peas. It was disgusting, and of course everybody laughed.

In the late 70’s I discovered whole snapper or whole trout, and these dishes were often wonderful, but unless I ordered fish, it would usually be a disaster. It got to the stage where I would occasionally send a meal back. Or if the owner of waiter said ‘how was your meal sir?’, I would start being honest and say that it was disappointing, usually with a reason why. Maybe there wasn’t enough vegetables, or the sauce didn’t taste homemade- when I think of it, I’ve become pretty fussy. As bad as my meals have become over the years, I haven’t quite had the experience that customers in Basil Fawlty’s restaurants have had. Two old ladies have an awful piece of steak and decide they want to cut their losses and get out of there. So one asks Sybil if they can skip dessert. It’s too late she tells them, ‘chef’s just opened the tin!’

So going back to the yum cha restaurant that I was referring to at the start. Yes, another disastrous experience. The restaurant is called ‘Westlake Chinese Restaurant’ and it is in Little Bourke Street. It was packed and the four of had to wait a little while to be seated. The first thing I noticed was a few huge fish tanks on the right with large docile looking fish swimming around and around. There were two large nets at the end of wooden poles leaning against one of the tanks. It was one of those situations that have always made me feel sick in which the customer can point to the fish he/ she would like, and the poor thing is whisked upstairs to be boiled alive. Yes, the web site refers ominously to ‘Choose from a variety of live seafood from the Aquariums.’

Those little yum cha trolleys starting coming around, but there wasn’t any echo of childhood yum cha with mother. I didn’t recognize any of the dishes, except for one called ‘chicken’s feet’ (gross). After passing on a number of choices, it began to look a bit silly so I said yes to a couple. The food was edible, but only just, and very expensive. A little plate of a few slices of strange looking pieces of beef cost $11. We left early, but not before we tasted four dishes, for about forty bucks. And that was without drinks. We then moseyed on down to somewhere safer in the Queen Victoria precinct, had better food, and spent about half the money.

So not a great Father’s Day dining experience- yum cha never again- but not the worst dining experience I have ever had. This title belongs to a dreadful place called ‘Don’t Tell Tom Bar and Cafe’ in Sydney Road Brunswick. I won’t even bother writing about the experience- I’ll just add the letter I wrote instead, which, I think, says it all. I will never be able to listen to my favourite album, ‘Astral Weeks’ the same way again!

To Whom It May Concern,

My wife and I came into your eating house during the song ‘Ballerina’ by Van Morrison, and left after the whole of Astral Weeks had been played again, and some more.

We waited some considerable time for what one would loosely describe as a bowl of soup and some chips and some watery orange juice.

None of the waiting staff came over at any stage to tell us why things were taking so long. This, despite the fact that there were a large number of them, sitting around and eating, and looking extremely lazy.

My wife eventually walked to the bar to enquire as to the whereabouts of the food- miraculously it was just coming. When it arrived, the chips were ok but the soup was inedible (pumpkin & coriander, recommended by the waitress!) and two pieces of cold, dry and hard toast.

We weren’t asked what we thought of the food, but duly paid the bill of $18.00 for crap food that took an eternity to arrive.

On the way home my wife found a spinach and cheese pie that took one minute to make, cost $2.00 and was infinitely more tasty.

My recommendation- have a stern word with your waiting staff, an even sterner word with the chef and oh, by the way, vacuum your carpet.

One * out of 5, and that’s for the Van Morrison music.

Posted by darren harrison at 2:33 AM