THE beach is almost as I remember it from a few years ago. Four miles long, clear and blue water, dark green hills, except the sand near the foreshore seems yellower than I remember it. The sand away from the foreshore is the soft and familiar lovely white. A great expanse of beach. Thinking of Joel Cohen, the US director, who apparently stayed at Port Douglas a couple of years ago. And thinking about D H Lawrence and his family coastal holidays at Robin Hood's Bay, Yorkshire. And Virginia and the Woolf's at St Ive's, Cornwall.


Macrossan Street is the main strip. There briefly at 8:00 tonight. An older couple talking about tax and superannuation. Families in shorts and singlets. We came from Melbourne yesterday, and rain and wind and 12 degrees. But tonight, difficult. A vomiting child. All about us, palm trees, tropical vegation. Almost expect to see monkeys swinging from trees. There is a lovely saltwater pool here. A Danish couple, with their two young boys. Two Swedish films on DVD in my suitcase. Finished the five hour version of 'Fanny & Alexander' the other night.
_____________________________________________________

THIS morning we left our front gate after seeing the Danes again, and getting to know them better. Along Mowbray Street, around the corner, is the Clink Theatre, nothing showing. I looked through the window- saw row after row of red chairs. The facade is weatherboard, with a wide verandah. A lovely, modest, community theatre looking empty and abandoned.  I thought about Ingmar Bergman, and how excited he might have been, as an incidental visitor to Port Douglas. The play I ran through in my mind was an historical play, in which the fifth act spills out onto the street, the actors traversing the lawns.

Macrossan Street was filled as usual with tourists like ourselves, and art galleries, restaurants, clothing shops. I heard some American voices. Later I ran the full length of the beach, into a hot, strong wind. I went past the gentle, left leaning curve, around the right, sharp bend, past the expert kite fliers, well beyond sunbakers, idle walkers, to isolated parts where the space between the foreshore and the mangrove swamps is dangerously narrow. Marvin Gaye finished singing 'Mercy, Mercy' in the iPod, and there in front of me, some six metres away, lies a baby crocodie, seemingly basking in the sun. I stood exhausted, stunned. Several curses escaped my mouth and my heart leapt. Facing me but not moving. Its eyes sunken and looking dead. I retreated swiftly and counted my blessings to get out of there alive. 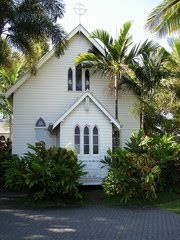 I walked with the two kids from one end of the rtail precinct to the other. At the western end of Macrossan Street you find the simple park with a slide an a solitary swing. Behind the swing, about thirty metres beyond, is the beautiful blue water, with boats gliding frequently into the marina. Enclosed in the park is a majestic and humble white weatherboard church, which features inside a square view of the blue water and purple hills beyond.

Tonight at 8:30 PM we are sitting in a cold air-conditioned lounge, whist outside the air temperature is balmy and warm and perfect.

THE Port Douglas foreshore was covered with people today. A nice, communal feeling wandering around the extensive weekend market. The marina, later, is good for fish 'n' chips and beer.

THE beach was beautiful today, for running. The usual drag of the hot gusty wind on the way- dogged pererverance, mostly. No crocodiles. But on the way back, exhiliration. The breeze dead. Rain sheeting down. People in the water. Long quality songs. After more than a dozen kilometres, steaming along to Joni Mitchell's 'Song For Sharon'- a great feeling, and finsishing with momentum, spilling onto Macrossan Street, down its east side.

UP at 3:00 AM for the bus to go to Cairns airport. American's from Pennsylvania. A haircut earler in the day. The barber says he hates Americans. Big, loud mouths, especially the ones from the mid-west. A final time at the beach as well. The family walking along the shore line. All of us wanting time to stand still- with work and routine beckoning. A nice surprise to have the St Kilda Football Club on the plane with us going home.
Posted by darren harrison at 3:21 AM