We drove- or rather I drove- all the way to Richmond in traffic whilst you sat in the back seat with your older sister-  a more experienced traveller at almost 15, but still naïve and high school inexperienced in many ways. Then you, on the precipice of change, chatting away at 12 and waiting, expectant, but no doubt trying to push things to the side or back of your mind. Things. What things? New encounters, mixing with people you do not know, a sea of unfamiliar faces and unfamiliar experiences awaiting you like a grey tide of uncertainty.

When we arrived, we parked just before the school crossing and I could see that you didn’t really want to get out of the car. The short walk across the road and into the grounds of the school were probably mildly terrifying; similar, but at the same time so different, from Mandela’s walk out of the prison on Robben Island. His was freedom, yours not so embracing.

Inside the gate there were adult helpers who told us about the lists. I found yours first. Melba 2, it said. Your sister told you she was in Melba 1 when she was in Year 7 last year. Then your sister simply disappeared. The right attitude. ‘Stand up, like I had to do last year’, would have been the silent message. And that philosophy was the same kind of thing for me. The clutch of Melba 1 students- maybe about a quarter of them- were sitting underneath a tree, and there was no adult in sight. I was glad I was not holding your hand. And I was glad that you didn’t insist I stay and sit with you.

In fact, I was impressed with your fortitude, which you somehow dragged up from the depths of your soul. I briefly introduced you to a couple of girls- ‘I’m from a primary in South Yarra…’, etc, one said, and I asked if you could sit down, then after a few minutes I told you I would be back soon. I went to another ‘house’ and looked for the only other girl you knew beside your sister, but just fleetingly. As a reinforcement during the day if you needed it. I glanced over to you, often, and caught your eye a couple of times with a little wave, but mostly watched you clandestinely, noticing your attentiveness to the other girls. Not talking, but listening, and learning, and navigating that awkward situation where you know nobody but other people seem to have some knowledge of each other as they sit smiling. You, a portrait of innocence, your childish multi-coloured backpack, your hair in plaits with a red heart-shaped adornment on each braid.

In desultory, threatening weather and a soft cool breeze, it started to rain, and the Melba 2 group leader- very young looking herself- began dragging you all away. I wandered over and said ‘have fun, darling’, and I was away. The sky turning charcoal and me hoping it wasn’t an omen.

I think back to a similar day two years ago with your sister- in fact it was the first day of the school year- and recall her anticipation and nervousness. I think of these days accurately or otherwise as being like Wordsworth’s ‘spots of time’, encounters that are completely new and challenging but will define you and shape you. Experiences you will always remember, like a wedding day, or a particular birthday, but essentially experiences that herald change or growth or some kind of significance in you.

I know you are 12 but it still feels a little like I abandoned you, but not abandonment in the gross or cruel sense, but rather leaving you in a foreign and challenging environment, but hopefully not a hostile one. I sit here at home typing this some hours into the day, with our newly arrived dog next to me, sitting on the couch. And I wonder how it is going. Have you found someone to chat to? Are other kids aware of you? Have you made them aware of you? Are you thinking ‘this new place- you know, may be ok after all.  I look forward to 2021.’ Or is it all horribly different to this?

Another spots of time moment for both of you, was the first day of primary school. You both had someone you would grow to care for next to you. For the eldest, Liberty, and still probably a best friend, even though you are now at different schools. For you, it was Holly, Liberty’s sister, who was here just last night. So, Holly and Liberty are experiencing the same thing as you two- a year 8 girl about to share the school with her little sister- except different schools.

I watched you come out of the wrought iron gates, waiting expectantly with a multitude of other parents. Your face. Drained of colour and exhausted looking. Not sad as such but relieved, a trial over for one day, only for it to be renewed in a couple of months. Will day one next year be any easier?

‘ What would you give it out of ten?’

‘Six out of ten’, you replied.

We climbed back into the car to navigate the traffic home. You unpacked your emotions. Steady, calm, even perhaps a little indifferent. Relief. 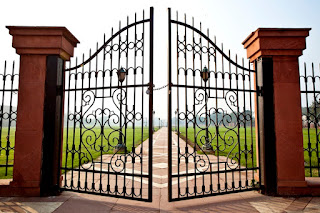 Posted by darren harrison at 4:37 PM