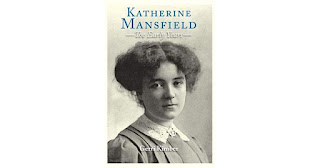 I HAVE nearly finished Gerri Kimber’s ‘Katherine Mansfield -The Early Years’, and it is so snug and warm and calming and reassuring and lovely, it’s like an old lost friend. Except it is also luxuriating in its richness and wonderment, and I don’t really have an old friend like this.

I have come to it after many books by and about Katherine Mansfield. The famous Antony Alpers’ biography, her notebooks and journals, Kathleen Jones’ biography, a favourite, and recently I acquired the Edinburgh University Press editions of her complete works, a great treasure. I was about 20 when I first read Mansfield. I nominated her short story collection ‘Bliss & Other Stories’ as a personal favourite when I was with a group of students in an English tutorial at university many years ago. I read all her short stories then. Those wondrous years of active imagination, fervent reading, abundant curiosity. She has stayed the course with me- along with D H Lawrence and Sylvia Plath- when many others, I have somehow, let go.

When I was in England she was a part of that great literary pilgrimage conducted over a period of more than two years. The ‘Elephant’ house with Murry in Hampstead Heath, her friend Koteliansky’s house at Acacia Road in St John’s Wood, in Fontainebleau in France stumbling luckily upon her gravestone- ‘the wife of Middleton Murry…’. Then many years later to Wellington itself, the childhood home in Thorndon, now a museum.

So I sit in my bedroom any spare moment of any day, thinking of KM constantly, wishing this book of her early years would never end. Somehow, despite the amount of time I have dedicated to her, I have forgotten a lot of these early years. Or at least some of it. It intrigues me from beginning to end. Nothing ordinary about her. Her very real passions and frustrations. Solitariness. Desires. Influences. Loves. Resentments. Ambition.

The book begins with her wealthy origins in Wellington and the various births in the family- the sisters and the much-loved younger brother who would be killed during the war. Not long after Vera was born came Chaddie, then KM in 1888, and Gwendoline who died as a baby followed very quickly by KM’s youngest sister, Jeanne. The family moved to nearby Karori, presumably for health reasons, to a house with a 14-acre garden called ‘Chesney Wold’ where the last sibling, KM’s favourite, Leslie was born. Karori became important to KM’s fiction. She wrote many stories as an adult based on her time there. I also saw that the school she went to- called, interestingly, Karori Normal School’ - is still functioning- http://www.kns.school.nz/ 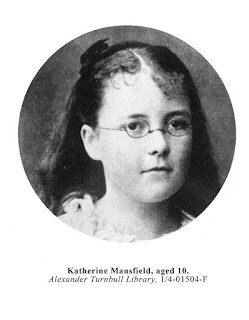 When she was 9 the family moved back to Thorndon (75 Tinakori Road), and the Beauchamp girls were enrolled in Wellington Girls’ High School, also still extant- https://wgc.school.nz/  This is where her first short story was published, aged 9. This is where the book begins to show KM as emerging as different to her sisters and her peers- an outsider, aloof, moody, idiosyncratic. And poetic. But now, and through her teen years, there is also a sense of awkwardness as well- her plumpness, glasses (which mysteriously disappeared later), and bourgeoning interest in music. KM would become quite an accomplished cellist.

At this time the wealthy Beauchamp’s took a number of domestic summer holidays and rented cottages at places like Day’s Bay. I re-read the longish ‘At The Bay’ recently as a memorial to her time spent on summer holidays.  Important friendships were formed at this time around the turn of the century, that would later develop into strong romantic and sexual relationships- the Trowell twins, Garnet and Tom, highly accomplished musicians, and Maata, a dark-skinned Maori princess that KM met at a wealthier, more prestigious school in Fitzherbert Terrace. She also knew somebody called Edith Bendall and wrote about laying her head on her naked breast at the holiday house at Day’s Bay. Her yearning also extended to one of the English cricketers on board a ship KM was on, returning from her first trip to England. She refers to him as Adonis in her journal.

KM has such a restlessness for love and desire like any teenager from any time, but also for culture, literature, music. Her writing is dominated by ‘decadent’ influences like her favourite, Oscar Wilde, whose aphorisms she adored. She soaked up time in London where she studied during her formative years at Queen’s College on Harley Street- http://www.qcl.org.uk/

Here she met her lifetime friend and ‘slave’, Ida Baker, also known as LM, for KM an emotional support until the very end. What an incredibly rich and fulfilling time she had at Queen’s College. It enabled her to study music (her beloved cello), practise her craft of writing, meet fascinating intellectuals and like-minded people she struggled to meet in Wellington. Once back home again when her education ‘finished’ she got into a real funk, angry with her family, her father in particular who held the purse strings, and becoming notorious for her moods and dissatisfaction. NZ was, it seemed, a stale city with little to offer (Kimber shows that intellectually, it was in fact quite rich for its size), but for the restless KM, pining for England, it was stuffy and provincial in the worst possible way. It did not fit in with her bohemian ways, her grandiose, modern thinking, her dreams of decadence and separateness. KM was establishing, in her own mind, the idea of having a career in writing as a modernist author, and Wellington seemed to dampen her ambitions.

Eventually she realised a way of getting around her father and gaining his support. At about 18 or 19 she eventually went back to London to pursue a new life, but not until after a camping holiday around the north island where she learned some valuable lessons about living a more practical life and learning how to peel potatoes, amongst other things.

Oh, how much she would have savoured getting on a boat again, escaping the stifling Wellington, and getting away from her father, except for his much- needed money, which was 100 pounds a year. And oh, how I can relate, right now, to the idea of getting on that boat and going once again to England and the promise of great adventure- Northumberland, Shropshire, Lakes District, Cornwall, Kent, Yorkshire, Cotswolds, Herefordshire, Devon, Wiltshire, Nottinghamshire…

She went back to England and eventually met John Middleton Murry and published short stories and created a deeply enriching life around her, inhabited by D H Lawrence, Virginia Woolf, and many others. She never forgot New Zealand, though, which crept into her stories time and time again. There is something about memories of our youth, and how we can paint them somehow rosier in our minds. If there was some rosiness. 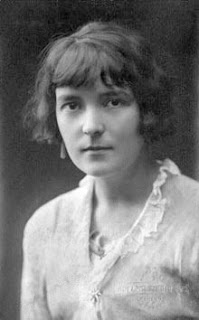 Posted by darren harrison at 5:24 PM