ON FINISHING ANOTHER YEAR

THE year, 2017, has nearly ended. It’s a cliché to say that the year flew by quickly, and that you don’t know what happened. I think it’s true, that as you get older, the years fly by more quickly. I remember a little bit about my twenties and thirties. I’m pretty sure more happened, that I saw and interacted with a greater volume of people, and I went out more and filled the day more brightly. I reflected less back then. So it almost seems like a contradiction to say that time went more slowly then.

I think, sometimes, about time and how it changes people. We have no choice but to become less vain than we once were. People see an image of you when you were sixteen, or twenty-five, or even thirty-two, and remark on how youthful you looked, and how much you have changed. Of course, they’re not rude enough to say you have less hair, or that you have become a bit more pudgy, or round-shouldered, or that lines have appeared around your eyes. But perhaps you can feel a sense of moral victory over all those people of your age who appear on television, whose faces seem damaged somehow, they crease in a funny way when they try and smile, their forehead seems like cement, or they have eyes that are puffy or seem strained in some way, and have teeth that gleam like sunlight on freshly fallen snow.  You haven’t opted for these artificial changes.

We can’t make time stand still but sometimes I would like to try. It’s not really an age thing, but about experiences. You are somewhere that feels really good but it has to end, and you have to move on to something else, like an end of a holiday, and return to responsibility and ordinary life. It’s ordinary life that can be the killer, that can extinguish not only some sense of fun, but more importantly a sense of freedom.

‘Freedom’ is the operative word. No wonder so many singers and writers express feelings about it.

I have spent this year, and every other year, wanting to be on that boat ‘sailing for some other shore/ where we can be what we want to be…’ This boat is sometimes heading for the northern hemisphere, to England, or Wales, or lately even Iceland. It is a place without too much responsibility, that is steeped in history, full of freedom and creativity, and romanticism. I want to set up camp there after this beautiful journey on the ship, through the darkness, and buy the history of wherever it is that we land in a big, fat book. I want to read this book from cover to cover- say it is ‘The History of Northumberland’, for example- a great leather bound book rich with words and images.  I want to live and breathe in my locale and discover and ponder over every twig and branch, and patch of soil, and river and mountain and castle and harbour and village green and village square. I want to discover the places where the boats were shipwrecked and the grisly murders took place, and bloody battles fought and won, and where great celebrations were held, and estuaries and caves were formed. In the winter, I could have a great open fire and sit at night, trembling with the rest of the family at the storms that shake the foundations of the house, our house, on the edge of the Northumberland coast, all coming from the Farne Islands. There will be seals practically on our doorstep in the morning and all the debris washed away, or pecked at by the glorious puffin birds. But you cannot make time stand still. Time drifts. Sometimes it almost seems to stop, when things are painful. 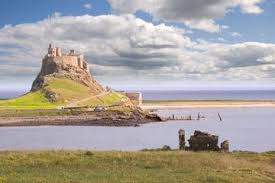 I get freedom from a lush green valley or the surging sea. Soon, the light alters and you have to be on your way again. Recently I was in a place in NSW called ‘Boomerang Beach’. It was night time and the beach was deserted and it was around twilight time. Everything light and clear, but you knew it would be dark in about an hour. The weather had the lovely cool night feel to it, that freshness you get after a warm day. I was walking with my daughter and we had a plan. To walk as far as the distant bend, and then turn around. There were sea birds surrounding us but nothing else of any life, save for the little fish probably in the shallows. The sea was roaring, as I am sure it is right now. We sang, loudly, because there was no-one around to hear us. The sky featured a faint pink, like a pink flag in the sky. And the colours in the water. Aqua, and mauve, and pink as well. It all, of course, ended and we were closer to closure, and departure, and regret. 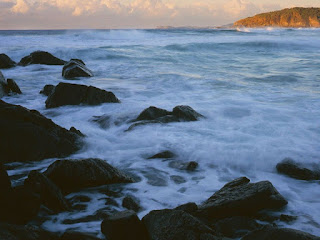 Tonight time has passed in another sense. It is December 21, my birthday. We have been to St Kilda- Leo’s spaghetti bar on Fitzroy St, Readings bookstore on Acland St and the beach foreshore, too, too briefly. There were joggers and cyclists and people with dogs. Others were couples holding hands. I felt quite free tonight. Then the radio bulletin. Someone has driven down Flinders St in the city and mowed people down.

Posted by darren harrison at 3:46 AM