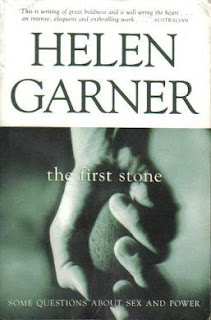 JUST caught a train back from the city. The train journey goes so much more quickly when your mind is fully engaged with something. Helen Garner does that to you. I found this when I read the Farquarson drowning story in This House of Grief. Even more so with Joe Cinque’s Consolation. The idea of who Joe was, very intriguing. You felt like you got to know him. The bits at his parents’ house in Newcastle were riveting. Now I am going back in her oeuvre further with The First Stone (I can see I have the ‘trilogy’ backwards).

So I am on this train today, as I said, just getting back now, reading very late into the book, based on the story of the inglorious end of Colin Shepherd’s reign as Master at Ormond House, Melbourne, in 1992-3 (real name Alan Gregory). There was some sort of end of year function- a ‘Smoko’ is what it is apparently called- after a formal Valedictory dinner, where staff and students living at the college get together and drink and dance and probably loosen their inhibitions and have what one would hope would be a fun and scandal free evening for all. During the course of the night, two young women claimed, in separate incidents, that Shepherd touched their breasts. ‘Cupped’, I think was the term they used. The allegations stated that Shepherd began making personal remarks to Elizabeth Rosen when they were alone in his office at some point during the evening. ‘I have indecent thoughts about you’, ‘can I have a real kiss before you go’, etc. This, accompanied by getting on the floor, grasping her hands, then moving his hands to her breasts. The second allegation referred to an incident on the dance floor with one Nicole Stewart, a friend of Elizabeth Rosen. Shepherd agrees he danced with Stewart, and did have a hand on her back during the dance at one point, but vehemently denies moving his hand onto her left breast.

There were complaints made, I think, to the Equal Opportunity Board of the college, and somehow the women felt affronted enough to eventually go to the police. A court case ensued- I am, for some reason, very hazy on these details-  however, Shepherd was found not guilty, but the damage for all parties had been done. The two women documented their own personal cost over the ordeal, and Shepherd lost his job- or, rather, he was given no choice because of the scandal but to resign- and the book details the personal cost for he and his family as well. There is a gripping moment in Garner’s research where she visits the Shepherd’s East Malvern home, and Mrs Shepherd cannot stop crying.

The biggest frustration for Garner was the fact that she was unable to gain an interview with the women. The same thing occurs in Joe Cinque’s Consolation. The female murderer in this saga will not reply to Garner’s letters, and in the end the book becomes unbalanced and ends up being a tribute to Joe. In the case of The First Stone, Garner is ‘on Shepherd’s side’ the whole time, but not just because she cannot properly craft the accusers’ story, but the very nature of what happened made her appalled. We get it very early on- from the point of view of a solicitor at the trial who asked one of the women ‘why didn’t you just slap him?’ then Garner herself, who wrote a sympathetic letter to Shepherd- ‘…I’m writing to say how terribly sorry about what has happened to you.’ Again, from Garner, ‘…why didn’t she get her mother or her friends to help her sort him out later, if she couldn’t deal with it herself at the time?’
The implication here, of helplessness or weakness on the women’s part, and solidarity with Shepherd because of the big, damaging fuss that was made of it when a few terse words might have been the outcome, and indeed is probably often the outcome (how many times a day does this kind of thing happen?)- all of this was apparently viewed outrageously by feminists at the time. Although I cannot remember it, I can well imagine the backlash that a well-respected and talented female writer in her fifties must have encountered.

Here, then, on my train, I am looking about, furtively, whilst I am continually dipping, riveted, to the pages. I am sitting opposite an attractive woman, not too far off my own age, thinking about beginning a conversation because she looks nice, and interesting. She has a compact suitcase on wheels with her, and looks slightly out of place as travellers often do when they are travelling to far-flung places. She spoke into her phone a couple of times, with a thick, possibly Spanish or Portuguese accent. I caught her eye a couple of times but I felt awkward and too shy to speak to her. She didn’t encourage me enough to start a conversation. I needed a return smile, or a long glance from her at the cover of my book. How I longed for her to say ‘Ahhh, Helen Garner, she’s an interesting one!’ Of course, no small part of my shyness and reluctance came from the fact that I am a male and she is a female. Will she think that I am ‘making a pass at her’ by opening up a conversation? Will the assumption be that I want to get to know her better and will probably ask for her number if she reciprocates in conversation too often? Am I in some way possibly a danger to her? There was no-one else in our corner of the carriage. Do strange men start up conversations with her all the time, and does she hate it? Conversely, would she be grateful for the energy and interest, and take the opportunity to ask lots of questions about Melbourne and perhaps my life and my book? Sadly, I am one of those people who are cautious and worry that I might offend.

Garner’s book is laced with the stories of women who have had unfortunate encounters with men. Men who have dived their hands under their skirt when they are young and working in shops. A woman raped by a doctor when she was wanting to find out whether or not she was pregnant. Garner herself who was kissed by a male stranger on a country train when she was a teenager, only to be rescued by somebody walking past her carriage. Her numbness and uncertainty and passivity in this encounter was incredible. She also tells a similar story, as an adult, of not having any idea how to deal with an unexpected kiss from a masseur during a session, whom she had already been to on a number of occasions. Completely vulnerable and naked except for a simple towel, she was unable to do anything but clam up, thank him, and leave.

The by-line for the book- ‘Some questions about sex and power’, throws an extraordinary array of different women’s reactions to unwanted gestures by encroaching males. It seems some men are just incredibly lucky, they get off scot-free- maybe they choose their ‘victims’ carefully- women who do not have the confidence or the will to speak up. Or bold women who think they can handle it themselves and say ‘fuck off’ and move on quickly from the whole experience. Or even women who are in some way ‘flattered’ by the approach- (yes, there are some in this book)- and therefore there are no repercussions, and there is no damage done. The men are just ‘finding out’. Some men will say they don’t know whether or not their actions will be welcomed. I dare say, though, that there must be many ‘wolves’ who have no interest in gaining the approval of the other person, that they are simply after gratification, or seeking power, and have no interest in the considerable cost due to their actions.
Then there are those men who I might say, somewhat sheepishly, may be considered quite unlucky. Was Shepherd one of those? If the allegations are true- and I am guessing Garner has her doubts- did Shepherd merely take on the wrong women in his inebriated state, where many, many males before him may have merely just been put swiftly back in their place?

I am also thinking, in very, very modern times, of Rolf Harris, who I have no sympathy for, and a little earlier the British con-man, Jimmy Saville, Bill Cosby for a very contemporary case. Here we are in different territory. The shocking abuse of power, and the multiple damaging acts. It is completely different with Shepherd, isn’t it? Did the women need to go to the police? And, interestingly, in these situations, where does the power lie? Is it with Shepherd, older and more experienced, and in a position , as ‘Master’ (interesting title) of authority and respect, possibly admiration or charisma, or is it with the women, young, attractive, possibly beguiling, Rosen for example described by Garner in a photo as ‘a goddess’, ‘daring beauty’, ‘a woman in the full glory of her youth’, even a reference to the ‘the double mass of her splendid bosom…bursting.’ So isn’t she allowed to be enchantingly beautiful?’ one might say.
We keep going back to why the women chose such a strong form of retaliation. I can’t remember who said it, maybe a friend of Garner’s, but somebody said she would hope, if it was her daughter, that she would have the nous to deal with it efficiently, a no-mess implication.

On the train, with all of this on my mind, and my potential friend having just departed, we stopped at Brunswick. A whole lot of hungry-looking, energetic males got on, wearing some kind of haphazard uniform from the local secondary college. They all looked about sixteen, so in about Year 10 or 11. It’s a potential school for my eldest daughter, two years away from high school. The thought struck me. Did I want this collective male gaze settling on her long, brown hair, her wide-eyes and fair complexion, her slim fingers and slender frame…

The title of the book, The First Stone, implies women are equally capable of inappropriate behaviour, that they use their sexual prowess when it is convenient and should be merciful when those of the opposite gender ‘get it wrong’. This line of thinking might consider that men are sometimes clumsy, and awkward, and poor at reading signals, or perhaps oblivious to signals, and that women sometimes ‘send off’ signals, perhaps inadvertently.

Personally, I can’t help but think about those women who reciprocates friendliness- there is no reason to be outright rude, for instance- and smile back, and engage, and even allow the male to buy a drink for them… then the signal is ‘you want to be with me’, ‘you find me mutually appealing’, ‘you want to have sex with me as well…’ It is this part of everything that makes me sad and a bit angry. It’s where, as a woman, you can’t really win. 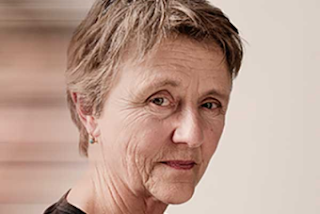 Posted by darren harrison at 12:13 AM