Robert Macfarlane's LANDMARKS: an acute eye upon the natural world 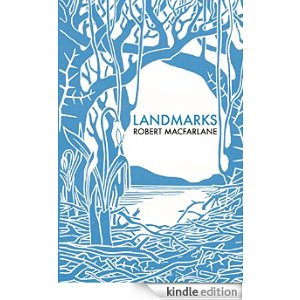 I WAS at The Hill of Content bookshop in Bourke Street a while back, holding a precious book voucher in my hand, desperately looking to spend it wisely, hungry for a nourishing book, hoping to find an elusive good novel, having read a few dissatisfying ones in a row. Books that lacked something, that failed to ignite or charge the soul.


I saw ‘Landmarks’ on the shelf with the lovely blue cover design. The author is the British travel writer, Robert Macfarlane. I challenged myself to discover something new. A new approach to reading. Non-fiction, travel, landscapes, language, the natural world.


I dipped into it briefly before lights out. I thought about returning it. Am I going to enjoy this?


I dipped into it again the next night and read a whole chapter. Result? Hooked.


The first line of the book: ‘This is a book about the power of language.’ Macfarlane is a wordsmith, he loves language. He writes of the ‘astonishing lexis for landscape.’ There is a glossary of language at the end of each section. Local dialect for earth, waterlands, edgelands, underlands, woodlands- the list goes on. As fascinating and extensive these lists are, and this is a very valuable lexicon to have (one wonders how much he might enjoy a glossary of Australian aboriginal dialect), this isn’t the aspect which captured my imagination the most. 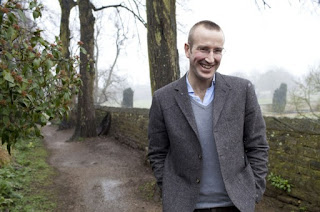 This is a book that contains so many interesting references and observations about the natural world, and done so poetically and intelligently, that you wish you had underlined, or at least placed a removable mark like a sticky label next to all those great expressions you encountered as you read along (I did do this once with the Complete Letters of Vincent Van Gogh, the best text I have read that screamed out a need to do this.)


The best way to represent the joy of this book is with quotations.


1.     Quoting John Muir on the power of observation, ‘The surface of the ground, so dull and forbidding at first sight…(in fact) shines and sparkles with crystals: mica, hornblende, feldspar, quartz, tourmaline…the radiance in some places is so great as to be fairly dazzling.’ Macfarlane has clearly learnt from Muir when he finds involvement in the natural world right beside the upper Thames in Essex next to a power station (‘The Wilds of Essex’, BBC2).


2.     Quoting Nan Shepard (The Living Mountain): ‘Beech-bud sheaths, blown in tide-mark lines along the edge of the roads, give a glow of brightness to the dusty roads of May.’


3.     Quoting his (deceased)  friend Roger Deakin, (the) ‘park-bench green’ of a pheasant’s neck; a hornet ‘tubby, like a weekend footballer in a striped vest.’


4.     Quoting (birdwatcher) J A Baker, ‘Edney Wood was quiet but frighteningly beautiful. The sodden glow of the millions of leaves burnt my eyes. But after sunset it was just a desolate, deserted slum of trees.’


5.     Quoting Baker (again) on animals’ fear of man: ‘A poisoned crow, gaping and helplessly floundering in the grass, bright yellow foam bubbling from its throat, will dash itself up again and again on to the descending wall of air, if you try to catch it.’


6.     Quoting John Muir (on Silver Pines): ‘Colossal spires 200 feet in height waved like supple goldenrods chanting and bowing low as if in worship, while the whole mass of their long, tremulous foliage was kindled into one continuous blaze of white sun-fire.’


7.     Muir again, on observing the trousers of a fellow traveller: ‘…pine needles, thin flakes and fibers of bark, hair, mica scales and minute grains of quartz, hornblende, etc; feathers, seed wings, moth and butterfly wings, legs and antennae of innumerable insects…flower petals, pollen dust and indeed bits of all plants, animals and minerals of the region adhere to them and are safely imbedded.’


The book is a mixture of Macfarlane’s travels, his meetings of mutual admirers of the natural world, his tributes and reminiscences of former naturalists and landscape historians and various dictionaries or glossaries of landscapes, seascapes and weather.


One of the most interesting things for me has been to do some research, and look up the various obscure places in England and the United Kingdom that offer so much joy to this traveller and travellers of the past.


There is Brock Barrow, the Esk Valley and Muncaster Fell, the Rhinogs, the Wells of Dee, the Cairngorms… the list goes on. And it is endlessly fascinating to look these places up to discover their geographical location and wonder about the places that have provided writers with a sense of wonder.


It seems to me to be a wonderful thing to spend years on a book, filled with earnest research and plenty of first hand observation and experience, on such a topic as this, the fascination of the natural world. Macfarlane’s journey is full of respect as one’s pilgrimage to Mecca might be, or the places explored by a famous painter or photographer. Macfarlane is as careful with his language, beautifully poetic, as his mentors or heroes are, and as any poet or painter might be. One of the best chapters is about Roger Deakin, and his visit to Walnut Tree Farm. He calls Deakin a ‘water man’, and a ‘film-maker, environmentalist and writer.’ Deakin taught Macfarlane that one’s approach to open water should shift, from a place where one should fly over, drive around, or stop at, to one in which one should enter or explore. Macfarlane has the utmost respect for Deakin (and became his friend before Deakin died). Macfarlane especially enjoyed Deakin’s book ‘Waterlog.’ There must be people out there whose favourite book will become ‘Landmarks’, and hold the kind of genuine awe and respect for Macfarlane, that Macfarlane has for Deakin, and Nan Shepherd, Richard Skelton, Richard Jefferies, and John Muir, and many others. 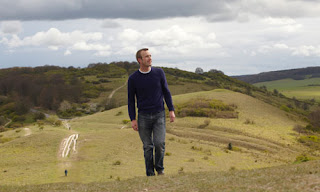 The clip below is testament to Macfarlane's ability to discover natural beauty in the most unlikeliest of places.
Posted by darren harrison at 5:20 AM