THE new biography of Edward Burne-Jones was reasonably captivating. The biographer, Fiona MacCarthy, wrote a better book several years ago about Burne-Jones' close friend, William Morris.This is probably because William Morris was a more interesting, perhaps more complex person who delved in many things in his life, including Iceland, poetry, Socialism and the arts. I have no doubt that Burne-Jones was very complex too, yet it doesn't come across as captivating in print. Burne-Jones was a brilliant Victorian artist, in the late Pre-Raphaelite period, well known and eventually knighted for his exquisite paintings, stained glass amidst other creative forms. His personal life was complex in that he seems to have fallen out of love with his wife, Georgina Macdonald, at a fairly early period in their marriage, and spent an inordinate amount of time wooing and writing passionate letters to others, especially women much younger, even 'girls.' Some of the women in Burne-Jones sexual and romantic imagination appeared in his pictures, no doubt much to the chagrin of his wife. One of these was the Greek model, Maria Zambaco, probably an innocent liason which caused him a lot of private pain. There were others that Burne-Jones became very close friends with, like Frances Horner and May Gaskell.

The best bits of the book for me were the references to many beautiful pictures, including one at the National Gallery of Victoria- Portrait of Baronne Madeleine Deslandes- and other more famous pictures like The Golden Stairs, Arthur Asleep at Avalon, King Cophetua and the Beggar Maid, The Wheel of Fortune and The Beguiling of Merlin, which I once saw at the Lady Lever Gallery near Liverpool, UK.

Burne-Jones also had in his association many interesting people, as in the aforementioned William Morris, Rudyard Kipling and family, Oscar Wilde, Henry James, and of course painters like Dante Gabriel Rossetti. Burne-Jones was lucky enough to meet and get to know and travel with his greatest hero, art critic John Ruskin. Burne-Jones was obsessed with Italian life and Italian art, and the great cathedrals of the world in Italy and France. These bits make enjoyable reading.

Unlike Vincent Van Gogh, painting at a similar time in a different European country, Burne-Jones achieved fame and made money in his lifetime. Fair enough, too.

The Wheel of Fortune 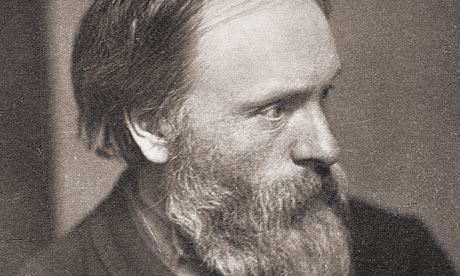 Posted by darren harrison at 8:05 PM