From Paris to Canberra: the Australian National Gallery

There were several pictures at the Musee D’Orsay in Paris that left a big impact on me, both times I visited a number of years ago. These included a famous Van Gogh self-portrait from 1899 that has an intense close-up of his face and is all a lovely light coloured blue with swirls in the background. The Musee D’Orsay also has his ‘Church at Auvers’ , which is situated around the corner from his grave stone in Auvers, painted in the last months of his life. Other paintings fixed in my memory from these visits include famous ones like ‘The Circus’ by Seurat, Manet’s ‘Olympia’ and Whistler’s ‘Portrait of the Mother’, as well as less well known ones like ‘La Toilette’ by Toulouse-Lautrec, ‘Closed Eyes’ by Odilon Redon and ‘The Talisman’ by Paul Serusier, all painted circa 1890.


A generous selection from the Musee D’Orsay is currently on exhibition in Canberra (Dec-April 2010). The exhibition is called ‘ Masterpieces from Paris' and I was excited to see that these last three paintings were part of it. I hadn’t expected to see pictures such as these again for a long, long time.

‘La Toilette’ was first exhibited by Toulouse-Lautrec in 1890. It is one of many paintings of his of women being caught in random, private moments- along with his pictures of women at the Moulin Rouge, these were favourite topics of his. The painting is from a heightened angle exploring a red-haired woman’s sculptured back. The painting is sympathetic toward her in that she is being allowed her private moment- her back covers most of the frame- and the blue is soft and appealing. We don’t need to see her face to appreciate the beauty of the young model. Portraits like these that are in a sense intimate and at the same time so anonymous (it is after all only a woman’s back that we are privy to), must have been unusual at this time. The ‘peep hole’ nature of the painting is intriguing. 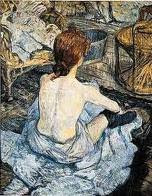 Odilon Redon is famous for his imaginative colours and side by side on the wall with some of his pictures with fantastic colours, ‘Closed Eyes’, also from 1890, might easily be overlooked. However there is something beautiful and haunting about the dreamy face and its androgynous features. Is Redon exploring death, or merely sleep? For me it seems to be suggesting some kind of spiritual satisfaction or awareness, a deep serenity and peacefulness that is very attractive. This kind of fertile ‘inner’ world of the imagination is a feature of his work and other Symbolist artists.

Finally, ‘The Talisman’ by Paul Serusier might also seem small and non-descript at first sight, but is historically a very important painting. It is a unique landscape that excited the artist and his group of friends who resided in Pont-Aven in Brittany, and had Paul Gauguin as their mentor. True to Gauguin’s style, the landscape is painted in patches of colour, and various features are discernible, such as water, a path, trees, and the rest is quite abstract, without perspective. The colours are beautifully and harmoniously integrated, and it is utterly original for its time, and enabled the small group of artists to feel completely liberated from the expectations placed upon them by artistic tastes from the past.

If you live somewhere in Australia, the exhibition is well worth visiting, especially if Paris is not within easy reach. The last painting I looked at again at the end, before leaving in a taxi to the airport for the brief trip back to Melbourne, was Van Gogh’s ‘Starry Night On The Rhone’- not the famous ‘Starry Night’ at the Metropolitan Museum of Modern Art in New York, but one just as rich with its glorious, deep blue ink sky and the gas lamps from the nearby town glowing and humming mysteriously on the darkened waters of the Rhone, in Arles, southern France. Moving and profound. 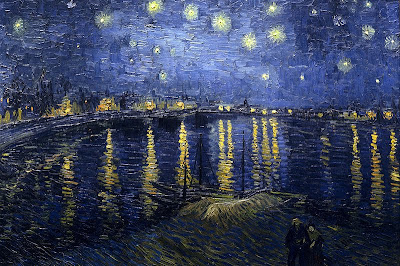 Posted by darren harrison at 6:28 PM