Persona (1966) and its Complex Relationship 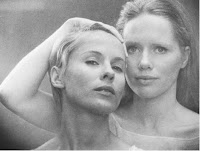 PERSONA was a huge critical success for Ingmar Bergman, but must have been very alienating for audiences in 1966 when it was released, just as it is confronting and puzzling in many ways today. The enigmatic opening of five and a half minutes is a case in point. The swiftly changing shots before the credits are of an erect penis, footage from the silent movies of early cinema, a crawling spider, the slaughter of a lamb, a thick nail being bashed into the palm of a hand, plenty of shots of a completely blank white screen, shots similar to Walkabout of walls and fences and open spaces, extreme close-ups of old people’s faces apparently inside a morgue, a young boy covered with a white sheet who at first appears to be dead, echoing footsteps sounding like those in an institution, the sound of a tap incessantly dripping, and the sound of a ringing telephone that disturbs the boy’s rest. The boy then explores a massive white screen in extreme close up with his fingers, in which appears a faded or blurred image of Bibi Andersson who plays Sister Alma in the film. Mixed in with these images are several shots of film projection, including the quick passage of a reel of film going through its spools. After that we are delivered a more or less conventional narrative about the aforementioned nurse who has been given the responsibility of looking after a famous stage actress, Elisabet Volger, (Liv Ullman in her first Bergman role). She has withdrawn from life and is feigning muteness . The rest of the film takes place on Faro Island and explores the unusual relationship between the two female protagonists.

Although the narrative does become more conventional once the action begins on the island, there are other various avant-garde complexities that are a hallmark of 1960’s European cinema. There are moments that interrupt the action to reinforce the fact that we are watching a film. The sound of a horn informs the crew that shooting is about to begin. The crew can occasionally be heard in the background, and even Bergman’s voice introducing a change of scene. An enigmatic moment in the film involves Elisabet walking right up to Sven Nykvist’s camera and taking a photo directly into the lens.

Alma is 25, engaged, and somewhat naïve. She clearly has a lot of regard for Elizabet and at one point recounts to her an extremely intimate story of an experience she had with a boy on the beach. It was an embarrassing moment for Bibi Andersson, whose voice was dubbed later. She describes an explicit orgy in some detail and therefore makes herself vulnerable to the mysterious actress who doesn’t speak to her and is clearly suffering some kind of pain. Later Alma realises her foolishness when she secretly reads a letter that Elisabet has written that comments on Alma’s intimate story and her naivety.

Bergman himself was ill during the making of the film, and in particular in the lead up to it, with dizzying spells, ear problems and penicillin poisoning. It was with some difficulty that he wrote the script for Persona, and at one stage he wasn’t sure if he would be able to direct a film again at all. The upshot for him when he was able to feel better was the meeting of Liv Ullman. She was a young Norwegian actress at the time, new to film, introduced to him by Bibi Andersson who had already appeared in Bergman films like The Seventh Seal and Wild Strawberries. Bergman fell in love with Ullman and she later became his wife. They had a daughter, and she appeared subsequently in many of his films.

The relationship between the two women grows more complex and at times there is a strong hint of intimacy, possibly lesbianism, and at other times a raging hostility on Alma’s part. Alma is optimistic and caring, but her positive outlook threatens to be engulfed by Elisabet’s dark outlook and general emptiness and despair. In one scene Alma deliberately plants a shard of glass onto the path that Elisabet will tread on in her bare feet. She is also close to throwing a pot of boiling water over her.

Despite this, Alma has a fascination for Elisabet and makes it clear in passages that she would like to become just like her. She is able to enter Elisabet’s consciousness and even dreams of making love to Elisabet’s husband. Bergman was struck by Andersson and Ullman’s physical likeness and he is able to emphasise this with the exploration of a kind of psychic merger. When both actresses were shown a shot of one side of their face merging with the opposite side of the other, they weren’t able to recognise themselves, but saw only the ugliness in the other. At the end of the film Alma is able to disengage herself from the incredible effect that Elisabet has had on her, and she returns to work on the mainland to resume her old life.

Persona raises lots of questions about Bergman’s ambivalence in regards to art and film making in particular. Bergman wrote a famous essay at the time entitled ‘The Snakeskin’ (Sight & Sound 1965), in which he said ‘To be quite frank I experience art–not only the film art–as being meaningless. By that I mean that art no longer has the power and possibility to influence the development of our lives.’ Some of this attitude seems to be apparent in Persona in which Bergman continually directs our attention to the idea that we as an audience are being manipulated. The deliberate reminders that we are watching something constructed and artificial are evidence of this. We also witness the naïve Alma talking to Elisabet near the start of the film about how much respect the general public should have for artists. Bergman has admitted that this is meant to be ironic.

Many interpretations of both women are possible. It seems to me that the film primarily explores a psychic battle between two women, with Elisabet being the callous and manipulative of the two, determined in a secretive way to enforce Alma to have a mental breakdown. The reasons for Elisabet’s cruel narcissism are hinted at in scenes involving her callous attitude to her husband and her child. But what happens to people who must be going through so much mental torture that they suddenly feel the need to pretend they cannot speak?

Posted by darren harrison at 2:53 AM